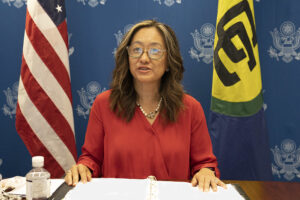 The diplomatic community in Sri Lanka have raised concerns over the State of Emergency.

The US Ambassador to Sri Lanka, Julie Chung said the voices of peaceful citizens need to be heard.

“Concerned by another State of Emergency. The voices of peaceful citizens need to be heard. And the very real challenges Sri Lankans are facing require long term solutions to set the country back on a path toward prosperity and opportunity for all. The SOE won’t help do that,” she tweeted.

“A democratic and peaceful approach is essential to resolving the current challenges. Rights to peaceful protest and freedom of expression must be respected alongside all fundamental rights. Emergency laws restricting those rights work against democratic dialogue & solutions,” she tweeted.

The Canadian High Commissioner to Sri Lanka, David McKinnon said that its hard to understand why it is necessary to declare a State of Emergency.

“Over the past weeks, the demonstrations across #SriLanka have overwhelmingly involved citizens enjoying their right to peaceful freedom of expression, and are a credit to the country’s democracy. It’s hard to understand why it is necessary, then, to declare a state of emergency,” he tweeted.

The Swiss Ambassador to Sri Lanka, Dominik Furgler said that Sri Lankans have been peacefully demonstrating because they are desperate and suffering.

“For weeks the Sri Lankans have been peacefully demonstrating because they are desperate and suffering. To avoid an escalation the causes have to be seriously and credibly addressed now. It‘s hard to see how a state of emergency could help in any way,” he said.

The Norwegian Ambassador to Sri Lanka, Trine Jøranli Eskedal said that Norway was closely following the situation in Sri Lanka.

“We are closely following the situation in #SriLanka. Using teargas on peaceful protesters and declaring a state of emergency when the protests have been peaceful and while the parliament is adjourned is concerning. We urge all sides to act with restraint,” she said.

New Zealand High Commissioner Michael Appleton said that New Zealand is concerned that Sri Lanka is again in a State of Emergency.

“New Zealand is concerned Sri Lanka is again in a State of Emergency, without a clear rationale provided. Sri Lankans, whose recent protests have been overwhelmingly peaceful, deserve to have their voices heard,” he said.

He encourages all to focus on solving Sri Lanka’s political and economic challenges. (Colombo Gazette)