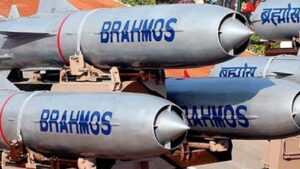 An anti-ship version of the BrahMos supersonic cruise missile was successfully test-fired jointly by the Indian Navy and the Andaman and Nicobar Command.

In a tweet, the Andaman and Nicobar Command said the test-firing was carried out on Wednesday.

The Andaman and Nicobar Command is the only tri-services command of the Indian armed forces.

“#IndianNavy & #ANC yet again demonstrate #CombatReadiness by successfully destroying target at sea through #AntiShip version of #BrahMos at A&N Islands on 27 Apr,” it said.

On April 19, the Indian Air Force (IAF) successfully test-fired the BrahMos missile from a Sukhoi fighter jet on the Eastern seaboard.

Last month, the Indian Navy successfully test-fired an advanced version of the Brahmos missile from a stealth destroyer in the Indian Ocean.

BrahMos missile flies at a speed of 2.8 Mach or almost three times the speed of sound.

The range of the advanced version of the missile is learnt to have been extended to around 350 km from the original 290 km. (PTI)