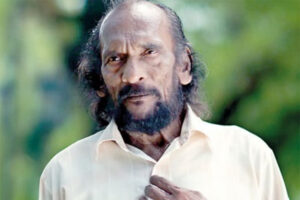 The villain of Sri Lankan cinema, Wilson Karunaratne, has died at the age of 79.

The veteran actor, also known as Wilson Karu, was considered one of the best villains in Sinhala cinema.

He also played the role of stunt director in several Sinhalese movies.

Karunaratne has acted in more than 240 movies.

He made his movie debut in the 1974 film Hadawath Naththo. (Colombo Gazette)