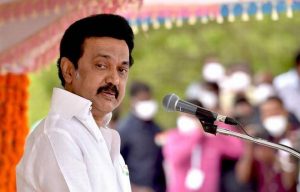 Tamil Nadu Chief Minister M K Stalin today appealed to the public to make donations to buy essentials such as food and ship it to Sri Lanka to help its people, who are battling the impact of a battered economy.

Stalin, who is also the president of the ruling DMK announced a contribution of Rs 1 crore from his party to the Chief Minister’s Public Relief Fund to support the island nation’s people.

Top AIADMK leader O Panneerselvam had days ago said that he would contribute Rs 50 lakh in his personal capacity to help the Lankan people.

The Chief Minister pointed out that the Tamil Nadu government would soon be sending 40,000 tonnes of rice, 500 tons of milk powder and life saving drugs in the first phase to the neighbouring country. He recalled that the Centre has given its approval for the state’s humanitarian initiative.

“This is the time to render whatever assistance that is possible to the beleaguered people,” he said in his appeal and requested donations to help the Sri Lankan people.

The Chief Minister informed that the donations received would be used to procure essentials like food and these would be sent to Sri Lanka.

People may visit https://ereceipt.tn.gov.in.cmprf/cmprf.html for making donations and it could be sent to Indian Overseas Bank’s Secretariat Branch in Chennai (SB account no.117201000000070 / IFSC IOBA0001172 and CMPRF-Chief Minister’s Public Relief Fund PAN No is AAAGC0038F).

Donors could make payments through Google Pay and by using other options like by way of sending a cheque or demand draft.