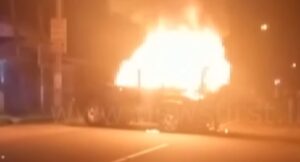 A 14-year-old boy was among three people arrested over an accident in Kuliyapitiya in which one person was killed.

The three people had been in a Defender vehicle which crashed into a motorcycle killing the rider.

The accident claimed the life of a 39-year-old man.

The Defender vehicle was later set on fire by an angry mob. (Colombo Gazette)