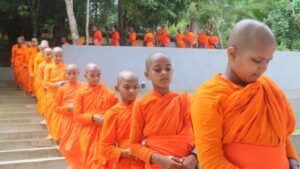 If select media reports that 1,000 Buddhist monks, meeting at capital Colombo’s democracy-symbolising Independence Square on Saturday has asked the ruling Rajapkasas to quit are to be taken seriously, then the question arises about the Prelates stepping in next, to enforce the diktat, if the current decision is not carried out now. One thing about the decision of the Sangha Sabha, as the open-air week-end conclave is known, the monks also want an ‘interim government’ formed alongside, thus serving a notice on reluctant Opposition SJB leader, Sajith Premadasa, who wants the exit of President Gotabaya Rajapaksa and Prime Minister Mahinda Rajapaksa at the same time – but with general elections and not an alternate government that is destined to be shaky, unprincipled and problematic from an economic policy-approach.

Honourable, appropriate and especially required in these testing times in the nation’s long socio-political history, such a course, if it came to that, should be a cause for greater concern, not celebration. Sri Lanka is the oldest electoral democracy in Asia, and throughout the tougher times of JVP insurgencies and the LTTE’s terrorist wars, the nation has not resorted to extra-constitutional ways to force change of government leadership. Sri Lanka would then have become a hundred per cent theocratic State, where the democratic distinction between the Church (Maha Sangha) and the State would have blurred for good and in the revere.

The immediate consequence, going beyond the ‘organised’ people’s movement on the capital’s Galle Face Green beach-front, theocratic initiatives of the kind, if it were to happen, has the potential to straightaway destroy the ethnic unity, much different from uniformity, that some of the self-styled organisers and more so participants at the protest site had sought to weave together through the past weeks. Remember, the widely-shared pictures and videos of Tamils and Sinhalas, Christians and Muslims, the latter two in their identifiable vestiges and prayer caps, coming together, demanding the exit of all Rajapaksas from the government and politics, sent out the message that Sri Lanka was coming together as one for the first time since Independence, whatever the cause and justification.

Any identification of the anti-Rajapaksa socio-political initiative with a particular community, that too with the majority community, could jeopardise the efforts at achieving ethnic unity after decades of distrust and mutual suspicions, even at the level of the individual. In this, any call that involves the Sangha Sabha and the Prelates would be much differently seen and interpreted, compared to near-similar calls from Colombo Archbishop, Malcolm Cardinal Ranjith and his denominational / religious ilk. It is all dependent on the reach, and more so perceptions of such reach.

Already, the Sri Lankan Tamil (SLT) polity, starting with the TNA, is shy of supporting the common cause, even while whole-heartedly joining the national chorus for the Rajapaksa exit. They do not want self-styled Sinhala-Buddhist nationalists like Wimal Weerawansa and Udaya Gammanpilla – respectively from the political left and right, – dictating terms to a successor-government. Given the numbers as they have panned out now, there are greater chances of such a course, if and when an alternative government became possible.

The Eastern Muslims have not spoken up as clearly as their Tamil brethren. But dating back from the post-war BBS attacks on Muslim places of worship, people and businesses, and leading up to the Easter serial-blasts, where the terrorists were identified as co-religionists, they too would feel uncomfortable, if not outright scarry, to back a government at the instance of the Buddhist clergy. Less said about the Upcountry Tamils the better, given the long history animosity and unprovoked attacks on them, starting with disenfranchisement and statelessness, as the first major policy initiative the State of Ceylon, as Sri Lanka was then known, post-Independence.

There is more to it. The international community, on whom the anti-Rajapaksa groups are variously leaning heavily, without any real justification just now, would feel hugely embarrassed. They have been the ones promoting religious harmony and cooperation, and also secularism in Sri Lanka, and shouting hoarse on minorities’ rights at UNHRC and elsewhere. Their under-pinning argument tis hat the Sinhala-Buddhist majority has led to ‘Sinhala-Buddhist majoritarianism’ and the clergy personifies the same in the given circumstances.

The international community continues to attribute it to the late Sirimavo Bandaranaike’s First Republican Constitution, making ‘secular Ceylon’ into ‘Sinhala-Buddhist’ Sri Lanka. That she chose to do so even after a young Buddhist monk was known to have assassinated her husband, Prime Minister S W R D Bandaranaike, added a twist that is still inexplicable.

With the 1972 Constitution in hand, religion, through the Maha Sangha, came to play in political and policy decisions at the top-most levels of democratically-elected governments. The situation worsened, in the eyes of the minorities and the international community when ‘stop-gap’ President D B Wijetunga in the early nineties, funded Buddhist monasteries to induct more novices.  Unsaid, children from low-income families felt blessed as they were encouraged to join the order and move up the theocratic order.

Incidentally, no one has asked anyone as to what had happened to the Tamil children from the North and the East, who were found to have been orphaned at the end of the war. The government put the numbers at around 2,000 or so, but the Tamil polity and civil society had no hesitation in multiplying it by three or four.  They were presumed to be mostly Hindus, some Christians and possibly a few Muslims, too.

The Sri Lankan State took them under its wings, refusing to hand them over to those that were not related by blood. The reason? Left to the care of so-called civil society organisations and NGOs, they would end up being converted to Christianity or Islam, and their Hindu identity would have been lost for ever.

Good intention, though the argument was weak. However, there is no knowing where they are and what they are, and a verifiable confirmation that they are not being raised as Buddhist monks, or in Buddhist families elsewhere in the country. Neither the Tamil polity or society, nor the intervening Government of National Unity (GNU) had thought of them, for them to talk about their faceless kids, who would not be past their teens.

Then there is the other question. True, unlike what the political opponents and civil society protestors want, neither President Gotabaya Rajapaksa, nor Prime Minister Mahinda Rajapaksa, could be wished away from power. The fact  is that multiple political opponents of the Rajapaksas, taken jointly or separately, have been able to muster the minimum number of 113 MPs in a total 225, required even to vote out the prime minister. The president’s exit, in the form of an impeachment motion, requires more than two-thirds vote in Parliament, or the backing of a minimum of 151 MPs.

It is obvious, if they have not got 113 through the past month and more, there is no question of the anti-Rajapaksa camp getting 151.This is independent of the position of those like the TNA, which wants all Rajapaksas out but also a prospective future design finalised and agreed upon, beforehand, for them to vote in favour of a no-trust motion. A sane position this, lest the entire show should end up in an embarrassing and confusing farce, which it is slowly but surely becoming.

Hence the name-dropping of the Maha Sangha and the Prelates, threatening that they would issue a diktat directing simultaneous leadership-change and an interim government. Incidentally, it is also the position of former President Maithripala Sirisena’s SLFP and a few other parties and groups. The mainline SJB Opposition wants the Rajapaksas out lock, stock and barrel, but want only fresh elections, not an interim government. Rather, they don’t want to be a part of it, if one became possible.

Implied in all these is that the anti-Rajapaksa group would all together muster 113 MPs first, get rid of Prime Minister Mahinda, form an interim government with the so-called super-structure of a ‘National Council’ (What?), with President Gotabaya continuing in office. Prima facie it reads good and pragmatic, but then the assumption is also that between the two, Gota is a better Buddhist, and a stauncher ‘Sinhala-Buddhist nationalist’ than elder brother Mahinda. That is going to be problematic, too, in politico-electoral terms.

The image of being a Sinhala-Buddhist majoritarian nationalist has stuck to Mahinda from his days as war-time President and afterwards, a cross that he continued to bear, if only to ensure that the substantial number of ‘Sinhala-Buddhist nationalist’ voters did not look elsewhere. Minority Tamil voters had backed the Rajapaksa SLPP’s parent in the SLFP even in the seventies when the Sirimavo leadership was routed out across the Sinhala belt. They also handed down Chandrika Bandaranaike-Kumaratunga (CBK) the biggest presidential poll victory in 1994. But they won’t the Rajapaksas even once.

Ironically, Mahinda won the presidency first in 2005 when the LTTE forced the Tamils to boycott the polls. Gota won Elections-2019, boycotting the Tamil voters, saying campaigning in Tamil areas was a waste of time, as they would not vote for him, anyway.

In these circumstances, the polity and the civil society seems to be handing over their presently chosen task of removing the Rajapaksas either through elections, if they fail the no-trust vote, to the Buddhist clergy. It has multiple consequences, as any over-stepping of a clergy-diktat by either or both of the Rajapaksas (a theoretical proposition that should not be ruled out of hand), could imply the popular protest getting intensified and acquiring communal colours.

The alternative still would be for the failed missionaries to approach the courts, which are a constitutional being, in form and content, and accept whatever the verdict!