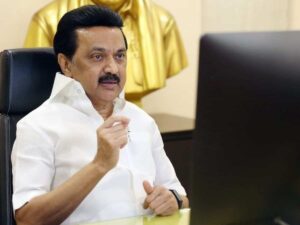 The Tamil Nadu Assembly today adopted a unanimous resolution urging the Union Government to consider the state government’s request immediately to send humanitarian assistance worth Rs 123 crore including rice, life-saving drugs and milk powder for children to the people of Sri Lanka who are now suffering due to the economic crisis.

“The Tamil Nadu government cannot send the aid directly to the people of Lanka. It can be done only with the permission of the Union government and through the Indian embassy in Sri Lanka. I have placed this request just after the island nation started facing the economic crisis and later, urged the Prime Minister and External Affairs Minister in this regard. But so far, there is no response from the Union government. Meanwhile, the situation in Lanka has worsened,” Stalin said moving the resolution.

The Chief Minister also pointed out that any help would be meaningful only if it is extended in time.

Hence the TN government felt that a resolution should be adopted in this regard and sent to the Union government.

He said Tamil Nadu has decided to send humanitarian assistance worth Rs 123 crore including 40,000 tonnes of rice worth Rs 80 crore, life-saving drugs worth Rs 28 crore and 500 tonnes of milk powder worth Rs 15 crore.

All political parties in the House supported the resolution moved by Chief Minister MK Stalin.

A few political parties expressed their willingness to donate one month’s salary of their MLAs to help the Lankan people while Deputy Leader of the Opposition O Panneerselvam announced that he would be contributing Rs 50 lakh on behalf of his family. Appreciating the gesture of Panneerselvam, the Chief Minister said, “The Deputy Leader of the Opposition has announced his contribution in the House so that others will follow suit.”

Moving the resolution, the Chief Minister said, “During my meeting with Prime Minister Narendra Modi on March 31, I made a request to him to give necessary permission to send humanitarian assistance to the Lankan Tamils. On knowing about this, certain Lankan Tamil leaders and Tamil organisations requested that the assistance could be sent to the people of Lanka and not just to Lankan Tamils because everyone in the country is facing the present crisis. This request has moved me. This is the culture of Tamils and it shows Lankan Tamils’ large-heartedness. Hence, the Tamil Nadu government has decided to send the assistance to the people of Lanka,” the Chief Minister said. (Courtesy Express News)