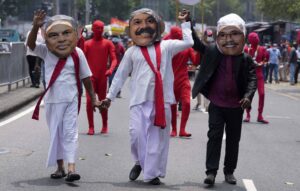 Nine out of 10 Sri Lankans hold the opinion that Prime Minister Mahinda Rajapaksa should resign and that the Rajapaksa family should leave Sri Lankan politics.

The Confidence in Democratic Governance Index (Wave 2) conducted by Social Indicator (SI), the survey research arm of the Centre for Policy Alternatives (CPA) found that 87% support the demand that President Gotabaya Rajapaksa should resign.

“Therefore the survey clearly indicates that in people’s minds the Rajapaksa’s have no role to play in solving the crisis and removing them is seen as the way out of the current crisis,” the CPA said.

CPA said that it is important to note that this view is harbored by all ethnic communities including the Sinhala majority who overwhelmingly voted him in three years ago.

“There is clear public support for the other proposals such as, the country should be governed by the council of experts until it overcomes the current crisis, abolishing the executive presidency, establishing an interim government comprising of all parties in Parliament and repealing the 20th amendment and replacing it with an amendment similar to the 19th amendment to the Constitution,” CPA added.

However, people seem to be cautious about the proposal that demands all 225 members of parliament to resign.

Only 56% of Sri Lankans support such a proposal. According to the survey findings, the support for those proposals does not vary significantly across different ethnic communities. (Colombo Gazette)