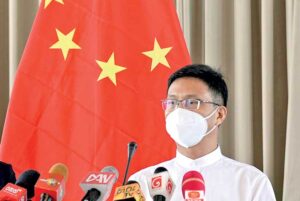 China has cautioned Sri Lanka on the negotiations with the International Monetary Fund (IMF) saying it could impact talks with China.

China’s Ambassador Qi Zhenhong was quoted as saying that Sri Lanka’s talks with the IMF will have an impact on Sri Lanka’s attempt to secure a US $ 2.5 billion loan from China.

Ambassador Qi Zhenhong was quoted as telling a group of journalists today that China was closely monitoring the negotiations to understand the terms and conditions of the deal with the IMF.

Qi Zhenhong has also said that China’s support to Sri Lanka will not be based on a particular party or Government. but the people of Sri Lanka.

The IMF has decided to support Sri Lanka’s efforts to overcome the current economic crisis by working closely with the authorities on their economic program.

Issuing a statement this week the IMF said that it will engage with all stakeholders in support of a timely resolution of the crisis.

The IMF team for Sri Lanka held initial technical discussions on an IMF-supported program with the delegation.

“During April 18–22, the Sri Lankan delegation and the IMF team had fruitful technical discussions on the authorities’ request for an IMF-supported program. The discussions covered recent economic and financial developments in Sri Lanka, the need for implementing a credible and coherent strategy to restore macroeconomic stability, and the importance of stronger social safety nets to mitigate the adverse impact of the current economic crisis on the poor and vulnerable. The IMF team welcomed the authorities’ plan to engage in a collaborative dialogue with their creditors,” Masahiro Nozaki, mission chief for Sri Lanka had said.

Going forward, Masahiro Nozaki said the IMF team will support Sri Lanka’s efforts to overcome the current economic crisis by working closely with the authorities on their economic program, and by engaging with all other stakeholders in support of a timely resolution of the crisis. (Colombo Gazette)