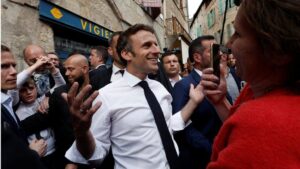 The two candidates fighting for the French presidency have launched bitter attacks on each other in a final bid to win over millions of undecided voters before Sunday’s election.

Centrist Emmanuel Macron is aiming to become the first sitting president to win a second term for 20 years.

He said Marine Le Pen’s far right was fuelled by unhappiness and risked a society of hate and fracture.

It was proof of his weakness, she said, that he used old insults of extremism.

The opinion polls give the sitting president the edge in the second round run-off, but Ms Le Pen’s far right party has never been this close to power which is why the stakes are so high.

The number one issue in this election has been the spiralling cost of living, from energy bills and food shopping to the price of filling up a car. It was identified very early on by the Le Pen team, who have promised a government of national unity to attack the high cost of living, as well as a referendum on immigration and a ban on wearing headscarves in public.

Her simple message to voters has been: “It’s Macron or France”.

Mr Macron also kept his message brief: “This election is a form of referendum, on secularism and on Europe.” He argues Ms Le Pen’s idea of a “Europe of nations” would mean an end to the EU.

He invoked the UK’s vote to leave the EU and the presidency of Donald Trump in a TV appeal to voters. “There are millions of people who, a few hours before Brexit, decided what was the point in going to vote. Millions did the same in 2016 with Trump. The next day they woke up with a hangover,” he said.

Accusing him of insulting both her and those who voted for her, Ms Le Pen said France had endured five years of chaos and could rediscover civil peace and respect. “We won’t find it with the same man and the same type of rule,” she said.

The biggest issue for both candidates is the large number of voters who are set to cast blank ballots or not even vote at all. The polls suggest turnout could be the lowest since 1969.

“I’m going to vote blank because it’s my national duty to cast my vote, but I still want to show my unhappiness with the system,” Edrisi, a voter in a southern suburb of Paris, told me.

The dissatisfaction with Mr Macron’s brand of centrism and with mainstream politics was laid bare in the first round, when well over half the electorate backed the far right or far left. (Courtesy BBC)