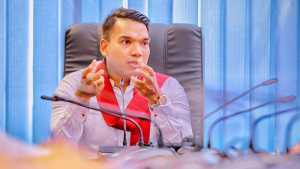 Rajapaksa told the Speaker in Parliament today that he, as an independent person in Parliament, can meet the youth protesting at GoGotaGama.

The former Minister said that the youth protesting at Galle Face have genuine grievances.

He said that if the youth at Galle Face want a political party then the Speaker can speak to the Election Commission and help form one for them.

Rajapaksa said that political parties should not be allowed to hijack the protesters.

The former Minister said that the protesters should be allowed to express their genuine grievances on the street.  (Colombo Gazette)