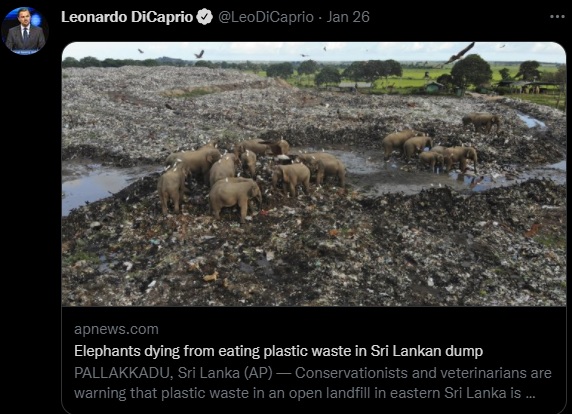 The Associated Press story notes that conservationists and veterinarians are warning that plastic waste in an open landfill in eastern Sri Lanka is killing elephants in the region, after two more were found dead over the weekend.

Around 20 elephants have died over the last eight years after consuming plastic trash in the dump in Pallakkadu village in Ampara district, about 210 kilometers (130 miles) east of the capital, Colombo.

Elephants are revered in Sri Lanka but are also endangered. Their numbers have dwindled from about 14,000 in the 19th century to 6,000 in 2011, according to the country’s first elephant census.

A tree that is new to science was recently named after Leonardo DiCaprio.

Scientists at the Royal Botanic Gardens, Kew, say they wanted to honour the star for his help in saving a rainforest from logging.

The tree, which has been given the official name, Uvariopsis dicaprio, grows only in the Cameroon forest known for its incredible biodiversity. (Colombo Gazette)