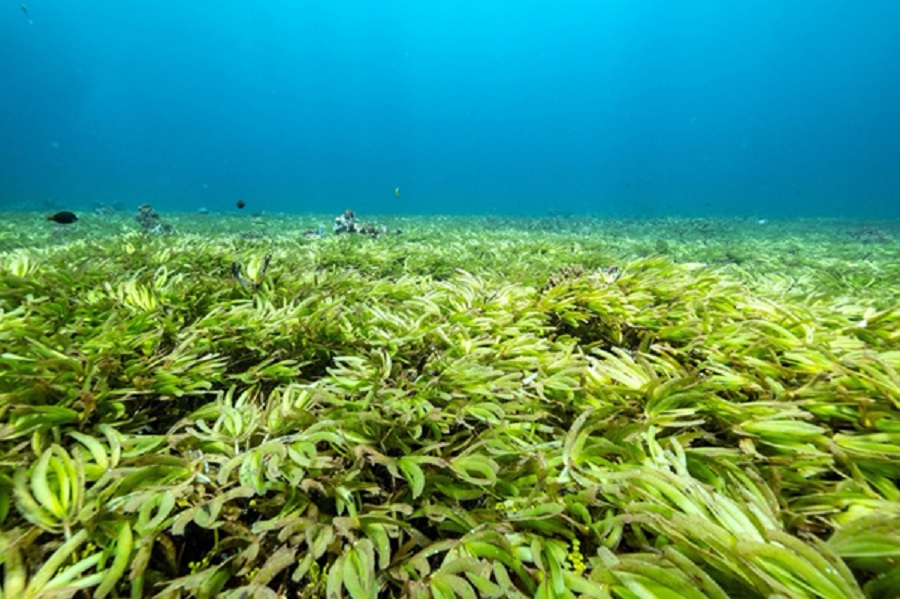 Seagrass is a marine flowering plant that are found in meadows in the shallow intertidal and deeper subtidal sloping coastlines in the world. There are approximately 72-75 species of seagrass that belong to different families.

Are seagrasses another name for ‘seaweed’ or are they completely different?

They are often confused with seaweeds due to their ‘similar’ appearance. In contrast to seaweed, they can photosynthesize using their long blade like leaves, transport nutrients and water in stems all the while using little air pockets to keep themselves afloat. They have rhizomes and root nodules which help them to stabilize and anchor in the sediment. Seagrasses also have flowering periods especially during the summer (Early December to February in the southern hemisphere and July to September in the northern hemisphere).

On the other hand, seaweed mostly consist of macro algae bodies with no leaves, stems and roots save for a holdfast that anchors seaweed to hard surfaces and transport nutrients via diffusion.

What services do seagrasses provide to the environment and to the society?

In what kind of areas do you find seagrass?

Seagrasses preferably grow in areas with high amounts of sunlight to help them release oxygen into the water column, increasing erosion and construction in the coastline creates disturbance in the environment resulting in sedimentation, seagrasses respond quickly to its environmental changes and often release its seeds or adjust its plant morphology to adapt to its new environment.

Where can you find them in Sri Lanka?

Are seagrasses under threat or are they under the risk of being endangered?

Like most organisms around the world, seagrasses are under threat due to climate change which alters the environmental conditions for seagrasses to thrive. This global issue further worsens the survival of seagrass with major threats like development of ecologically insensitive coastal infrastructure projects which require the decimation of seagrass meadows which eventually impact the fish stocks of shallow waters. Some industries that are built with the intention of supporting local fisheries like shrimp farms destroy fishing habitats for other shallow water fish and subsequently contribute to the decline of local marine life. This is particularly seen in the Puttalam-Kalpitiya area.

Other major contenders for seagrass destruction can be seen in reliance of harmful fishing practices that utilize explosives, trawling and dredging damage the seabed thereby increasing sediment suspension that eventually smother and destroy seagrass meadows in the process. While expelling of nitrogen-phosphate rich fertilizer from upstream farms create algal blooms in the sea which eventually suffocate seagrasses and most marine life.

Are there ways to save seagrasses?

In most countries around the world, seagrass is being restored in areas where seagrass meadows are severely degraded since the past century. In most instances of restoration, seagrasses are extracted from ‘donor’ meadows and their shoots are transplanted in a degraded meadow where their growth is actively monitored until they are fully established. There is also an increase of seed-based restoration techniques being actively used in place of shoot-based restoration practices.

In Sri Lanka, some larger seagrass meadows exist in areas where large dugongs roam around, there have been dugong conservation programs implemented in the past which looks at ways to protect dugong populations and to help conserve seagrass meadows. However, there are no direct seagrass conservation seeking to restore degraded seagrass meadows in large coastal development coastlines in Sri Lanka. There is also a need to further the knowledge of local seagrass species in this country as Sri Lanka possesses a unique biodiversity that is not limited to larger mammals alone.

The ecological services of seagrasses are not very popular in the mainstream media. It would be wise for people to appreciate the beauty and the services provided by these elusive and yet misunderstood plants and consider the potential of prioritizing seagrass conservation to revive fisheries communities.