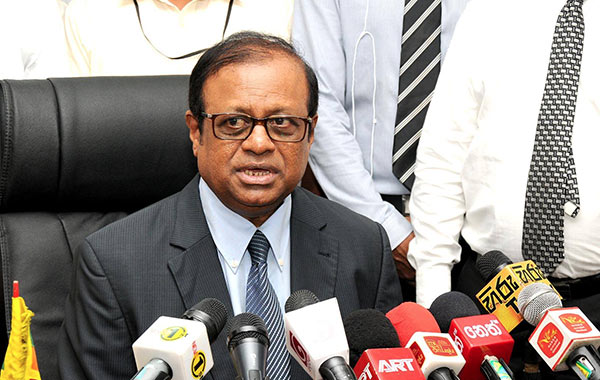 The intervening week-end visit of Chinese Foreign Minister Wang Yi may have pushed domestic politics to the background, yes, but the latter is going to bounce back to the centre-stage once the visitor had left. It means that the controversy kicked up by President Gotabaya Rajapaksa’s overnight sacking of state minister Susil Premajayantha, the subsequent continuing white-threat of the 14-MP SLFP-parent partner to quit the government, would come to dominate politics, pushing the forex crisis, too, to the sidelines, all over again.

The government can breathe easy with the economic aid promised by India first through the Trinco oil tank farms deal, and later in the same week by the Chinese visitor, but it is only for the short-term. This government, with the cooperation of the political Opposition, is in a position to restructure the economy to make it both pragmatic and sustainable, unlike the post-Independence models of market-capitalism and socialism. That is most unlikely to happen, not for any fault of the incumbent leadership, but owes to the larger national political culture.

Starting it at home

Opinion is divided if the President’s bias against his own party minister is right or wrong. In principle, he has to start disciplining at home and that’s what he has seemingly done. Two, the allies are that of the party of which his brother and Prime Minster, Mahinda Rajapaksa, is in charge.

When and how Mahinda as SLPP chief initiates talks with the allies to set right dissent from within is the question. Or, will he at all, given the fragile nature of the coalition, in the face of perceptions about the government’s ever-growing unpopularity?

Alternatively, the Rajapaksas could sack alliance ministers criticising the government from within. That could set off a bang, as the impression is that the government is now akin to a house of cards ready to collapse at the mildest breeze. At installation it was among the strongest of elected political structures in the country commanded by the strongest of contemporary personalities in ex-strategist of the victorious LTTE war, facing of anticipated strong winds effortlessly. Not any more, it would now seem.

Instead, this government looks every bit the ramshackle predecessor regime calling itself the ‘government of national unity’ (GNU). They even amended the constitution to facilitate a larger Cabinet, in GNU’s name. Ultimately, it proved to be among the worst and disunited government since Independence. It went on so far as to president Maithripala Sirisena sacking prime minister Ranil Wickremesinghe, the latter only to be restored by the nation’s supreme court.

Nothing of the kind has happened yet. Nor is likely to happen that very way with this government either. There are two reasons. One, the Rajapaksas are together at it, holding the job of the president and prime minister, and a few other ministers, too. Two, their SLPP by itself has a simple majority in the 225-member Parliament.

But then the sacking of minister Premajayantha indicates that all is not well in the state of the SLPP parliamentary party. His sacking is seen as a warning to those wanting to raise a voice of dissent. In Sri Lankan conditions, dissent from within is at times the first step to crossing over to the opposition camp. The sacking likewise implies that the leadership may be anticipating more such voices to emerge if left unchecked.

GNU, need of the hour

In real and realistic terms, the nation at this juncture can do with a real ‘government of national unity’ (GNU). The state of the nation’s economy, the consequent poverty and poverty-mitigation efforts through long-term structural changes all point to the urgent need for a national consensus on the economic front, more than is palpable already.

President Gota has to initiate the efforts in this direction. Even if he and his party are ready for it, he will not attempt it, nor can he expect to succeed, unless he is sure that the political opposition is on board. The problem then will be for the centre-left and centre-right alliance partners of the government, who won’t want to do business with the ‘capitalist’ opposition SJB and its UNP parent.

For the SLPP-SLFP combine, a GNU may be the best bet to bury their own socialist sins from the past. For the SJB-UNP combo, it will be an occasion to bury their own sins derived from their ideology of market capitalism, which completely killed the country’s agriculture sector. They can begin afresh, so can the nation can begin afresh. Like their US counterparts, they then can niggle around with details of what the other is doing wrong and what they alone can do it right.

This is how in the US, for instance, the Big Two, namely, the Democrats and Republicans play around with their respective constituencies, all centred entirely on domestic politics and economics. Yes, past president Donald Trump tried to upset the apple-cart, his constituency was happy, but not his party.

All of it will require a few bold steps by all stake-holders in the nation’s polity. And bold decisions in the right direction and way is what the nation now needs. No patch-up solutions and no permanent complaints against the Rajapaksas, who are yet to take any meaningful initiatives addressing the medium and long-terms. While Gota’s ‘organic farming’ was worth a try, the nation will wholly and whole-heartedly shy away from it, now after the current disastrous plan of implementation.

The Opposition too seems interested in unseating the Rajapaksas at their weakest of socio-political moments since Mahinda became president first time in 2005. They are not coming up with any viable economic solution, for the short, medium and long-terms, as they too do not have any. Otherwise, they would have tested at least some of them when in power recently.

Some of them want the government to go to the IMF, else if put in power, their track-record shows that they would only be pledging more of the ‘family silver’, if left, to China, yes. That’s the only thing that they did with Hambantota. In their lexicon, it is offloading unproductive assets. But it may have helped cut down on debt-repayment, which imagine, will add up to a whooping $ 7.5 m, fiscal 2022.

The nation will be thankful to them all, eternally, if they come together in a honest national coalition at least until they arrived at a consensual approach to problem-solving. Then they can go back and fight the presidential polls of 2024 on their own. Else, there may not be a nation as is known now (nothing to do with separatist calls, from the past or in the future) for them to thank to, at the end of every election in the future!