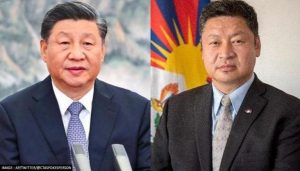 On Friday, the Tibetan government-in-exile asked China to “stop growling” over the Tibet issue, saying that if it really cares about the Tibetan people’s well-being, it should work to resolve the dispute through discussion. This comes after media reports claimed that the Chinese Embassy in Delhi raised “concern” about Indian lawmakers attending an event organised by the Tibetan government-in-Exile in the national capital. Several MPs from various parties reportedly attended an event in Delhi last week, as per ANI.

Tenzin Lekshay, the spokesperson of the Tibetan government-in-exile, lambasted China in a series of tweets, stating that India’s unwavering support for Tibet makes China uneasy. “India’s constant solidarity for Tibet makes China uneasiness. As for the All Party Indian Parliamentary Forum for Tibet, it was initiated by Shri MC Chagla in 1970 & now chaired by @SujeetKOfficial. Many great Indian leaders supported Tibet in the past, & many more supports now [sic],” he tweeted. Lekshay further chastised Beijing, saying that it needed to stop grumbling here and there all the time. “If they are truly concerned about Tibet and its people, the moment has come for them to take proactive steps toward resolving the Sino-Tibetan dispute through dialogue,” he added.

The spokesperson further added that the Tibet issue is not at all the internal matter of China and whatever happens in Tibet is a major source of concern for people all around the world. He stated that China’s characterisation of the Central Tibetan Administration as a separatist political organisation will not aid in the resolution of the Sino-Tibetan conflict. “It is well known that Middle Way Policy is not about separation rather it aspires for genuine autonomy within the framework of Chinese Constitution,” Lekshay wrote in another tweet.

Tibetan government-in-exile in India
It should be mentioned here that Tibetans and Chinese forces clashed violently during the uprising in 1959. After a failed revolt against Chinese control, the 14th Dalai Lama escaped to India. The highest Tibetan Buddhist leader, the Dalai Lama, then went on to establish a government-in-exile in India. Meanwhile, since taking office as President of China in 2013, Xi Jinping has adopted an assertive Tibet policy, with claims of human rights breaches surfacing on a regular basis. -(RepublicWorld.com)