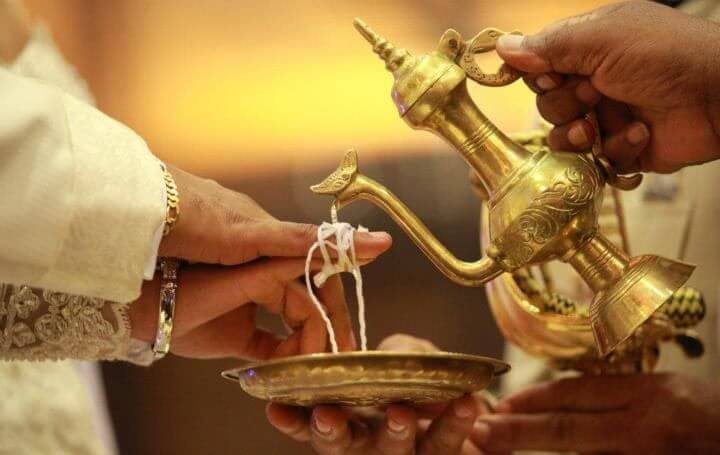 If someone thought that marriages are made in heaven, it not always is. If one of the two is not a Sri Lankan and the wedding has to be performed in Sri Lanka, then the Ministry of Defence (MoD) is to decide if that foreigner is a suitable guy or the girl for the local. Or, that is what the Registrar-General has ordained. It shall be in force unless the Supreme Court, which has already been moved, turns down the government decision.

Prima facie, fundamental rights petitions in this regard would centre on the individual’s right to choose a spouse of his or her choice. In Sri Lanka where family-arranged marriages are fewer compared to love-marriages, such a pleading has greater practical application. The issue boils down the power of the State over one’s own parents to decide in such matters. That is, when the individual has arrogated the right of choosing the spouse to the self, and not even to the parents, where does the question of the State intervention arise?

The government order refers to ‘security clearance’ for a foreign spouse to marry a local inside Sri Lanka. One guesses that it extends to the marriage of a Sri Lankan that is registered in the nation’s chanceries elsewhere. Through the ethnic war and even afterwards, SLT Tamil citizens especially used to register their marriages in the Sri Lankan Deputy High Commission in Chennai, India, for instance. It is unclear if those marriages are also covered under the new order, but the assumption is that they too should be.

One could imagine that such a rule might have had some relevance and application either at the height of the LTTE war or even the preceding JVP insurgencies I & II in the seventies and the eighties, respectively. Even then it would not have made any practical sense but one could assume that there was a divine purpose which lesser mortals might not have been able to fathom.

Today, over a decade after the LTTE war, it does not make even political sense. It makes even less practical sense. This is because there is no guidelines, at least for the marriageable two to know as to the procedure the MoD would follow in processing applications vis a vis the ‘security clearance’ for the foreigner between the two of them.

At present, Sri Lankan laws and practices ordain that a prospective employer could ask for the prospective employee to produce a no-objection certificate (NOC) from the local police station from the area where he is an ordinary resident. Whether or not it works in real terms, at least it is there on paper, and every employer feels comfortable once he has the reports in his records. Of what additional use it could be if the employee is caught with his hand in the till or is involved in other criminal act is anybody’s question. It is one of those colonial hang-overs that have survived for decades.

Will the MoD follow this kind of certification by the governments of a prospective foreigner-spouse that the person concerned was ‘not a security threat’ to his/her mother/father land and can be expected to be so for Sri Lanka, too? If so, how many foreign governments would oblige? If not, what procedure does the MoD plan to put in place to do the ‘security check’ on an applicant? Is it feasible, both in terms of infrastructure and more so desirability? Will counterpart agencies in those countries entertain Sri Lankan agents snooping around for information on a prospective spouse-applicant in Sri Lanka, to confirm that he or she was not a security threat to Sri Lanka?

In such a course, there could be a huge embarrassment on occasions and harassment of the field personnel otherwise – for the Sri Lankan agents and agencies. In a nation where a substantial section of its population, especially from the Sri Lankan Tamil community, has taken overseas citizenship, what if any or many of them wants to marry a ‘Sri Lankan’ in Sri Lanka, the traditional way with family and friends still settled here? What about those under the ‘dual citizenship’ category? Are these segments exempt from the new law or not?

Anyway, has the MoD been tasked to outline crimes that could be a security-threat too? For instance, is murder a penal crime or is also a security-threat if the victim was not a governmental or a community leader but  was only a layman in his country? Likewise, if a drug lord as much a security threat to Sri Lanka as a gun-runner, even if Sri Lanka is not the final destination for either?

Duality of another kind

The erstwhile ‘yahapalayana’ government amended the Constitution and the election laws to bar ‘dual citizens’ too from contesting the presidential polls. Rather than ensuring that they did right things the right way, they thought negatively about their political opponents all the time. They also thought and acted negatively against one another. Thus, they also upped the minimum age for contesting presidential polls from 30 to 35, to ensure that present-day Cabinet Minister Namal Rajapaksa could not contest the presidential polls. In between, the Supreme Court had ruled that ‘dual citizens’ cannot become parliamentarians in Sri Lanka.

The Rajapaksas on return to power over-turned most, if not all of them that required overturning. Thus dual citizens could become parliamentarians, a minimum qualification for Basil Rajapaksa to join the Gota Cabinet. Technically this also means that the Sri Lankan Parliament could be manned exclusively by ‘dual citizens’, not necessarily by native Sri Lankans with no duality of the citizenship kind.

The less said about the long list of Sri Lankan envoys and armed forces personnel, including senior officers, serving and retired. Dual citizens have held such positions in the past, dual citizens may continue to be holding similar positions at present, though no ready list is available for a quick cross-check.

Does it that dual citizens (who are quasi ‘foreigners’) can hold any high office in the government, yet will have to obtain ‘security clearance’ only if they planned to marry a single-nation Sri Lankan citizens? That way, yes, the Registrar-General may have put the security of the citizens at a higher plane than that of the nation.

Who then can complain that this is a ‘securitised State’, when the concern is about ensuring that the marriage of a Sri Lankan with a foreigner had to be broken when found that the foreigner-spouse was a security risk, as much to the person of his/her Sri Lankan spouse as to the nation?

Then of course there is another provision that a foreign spouse should give a self-declaration about the history of his/her physical ailments, and also a declaration that on his Covid status. Yes, the applicant could get a full medical check-up done and even attaching the medical reports/certificates with his application.

But has the Registrar-General published a list of ailments for which such certification would be acceptable? And how is the Ministry of Defence qualified to certify such medical certificates or order specific medical tests to be done. A sub-text here is if a medical certificate issued by a medical institution overseas be acceptable to the MoD in Colombo? Or, how can the MoD confirm that the medical institution mentioned is either fake or sub-standard?

The latter should be one of a kind in the world we are living in, or so it seems. Either someone has contracted Covid or not. How can it becomes a national security threat when there are any number of Corona and now Omicron patients with its variants in the country, all of them Sri Lankan citizens? How are they less of a security threat, if any of the traditional kind existed, than a foreigner afflicted by Covid?

Sri Lanka, like the rest of the world is finding out, how the pandemic can be a real security threat of the non-traditional kind, by crippling an adversity’s economy and killing its population in scores, if not tens of thousands. But it also implies that Corona especially has been sent out to Sri Lanka, too, to prove its ability to be a security-threat to the nation.

Who then is the evil power that created or cultured the virus in the laboratory and spread it out to the world? Does Colombo accepts the unproven western theory that it was China? Or, does it have any clue about any other country that was the possible source of the pandemic?