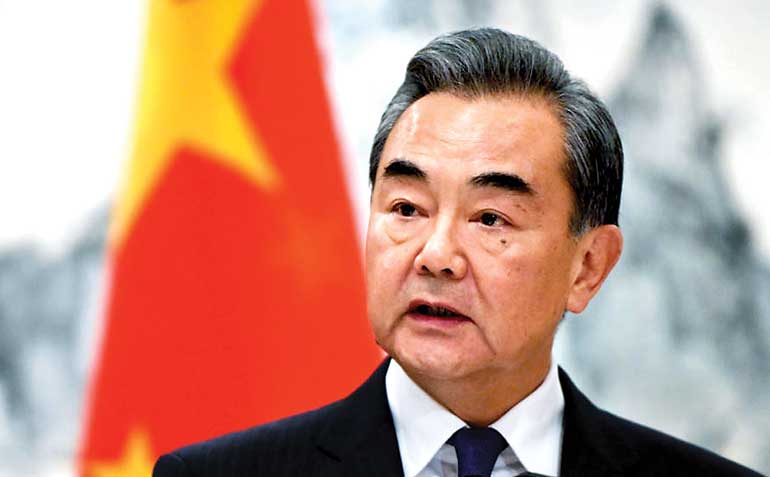 As the Chinese New Year approaches in 2022, the Chinese government is preparing to confront Sri Lanka over the dumping of its organic fertilizer shipment and to make amends.

The first diplomatic visit will be made in 2022 by China’s State Councilor and Foreign Minister Wang Yi, a well-known figure in Sri Lanka. He is expected to arrive on the island on January 8 with more development projects and freebies to help mend the strained relations between China and Sri Lanka. It has been revealed that he will ensure that Sri Lanka will always be grateful to them.

Wang has visited Sri Lanka since the launch of the Chinese Road and Belt Initiative in 2013. He first arrived in February 2016 and then again in July of that year. Again in January 2020 and in June 2021, he paid visits to the Island nation.

China lost its cool when Sri Lanka’s top agriculture scientists rejected China’s contaminated organic fertilizer shipment. China took the Ministry of Agriculture to the Supreme Court to get its massive compensation of USD 8 million while dollar crisis propped up. They showed their subtle anger over Sri Lanka buying India’s Nano fertilizer having rejecting their fertilizer. They decided to claim compensation in order to teach Sri Lanka a lesson.

In April 2021, Wang  hosted the zoom conference, which was attended by Afghan acting Foreign Minister Mohammed Haneef Atmar, Pakistani Foreign Minister Shah Mahmood Qureshi, Nepali Foreign Minister Pradeep Kumar Gyawali, then Sri Lankan Foreign Minister Dinesh Gunawardena, and Bangladesh’s Foreign Minister A.K. Abdul Momen and wanted all the six countries to consolidate consensus on cooperation against the COVID-19 in South Asia. The meeting was not attended by India. Although China is not part of the South Asian region it has managed to creep in by way of investing in aimless development  projects in Sri Lanka as well in in  Pakistan that does not reap revenues as expected.

Wang’s visit coincides with an unresolved dispute over Chinese fertilizer. Because of the dispute, China eventually banned the state-run People’s Bank. Rather than remove the contaminated fertilizer, the Chinese went to the local court and filed a complaint through their local agent. The Qingdao Seawin Biotech company refused to accept responsibility and instead blacklisted the People’s Bank of Sri Lanka with the help of the Chinese Embassy and powerful politicians. For nearly two months, the issue has remained unresolved. The Chinese have not adjusted to the situation, despite the government wanted both parties to reach for an amicable agreement.

Local newspapers quoted that the shipment from China was deemed in illegal importation in the absence of a valuable Protection of Phytosanitary Certifcate (PPC) from the Chinese company. This was revealed by a top official of the Ministry of Agriculture. As a result, the National Plant Protection Organisation (NPPO) who lacks the legal authority to inspect the fertilizer issued a non-compliance notice to its Chinese counterpart after sample testing.  But China is adamant to accept the fault. They have been forcing Sri Lanka to consider the fertilizer or pay compensation so that their international image is not tarnished over a minor fertilizer issue.

Wang stated when he arrived in January 2020 that Sri Lanka is a strategic partner for China and that China will continue to support Sri Lanka’s interests. He also stated that China would always respect Sri Lanka’s sovereignty and that no ‘interference’ in the country’s internal affairs would be tolerated. Wang stated during his meeting with President Gotabaya Rajapaksa and his brother, Prime Minister Mahinda Rajapaksa, that China’s policy toward Sri Lanka had always been consistent, and that it would continue to be Sri Lanka’s ‘reliable friend’. all of this, however, is now a distant memory, as ’Sri Lanka has gone against the Chinese desire to please them’.

Despite the fact that it is not widely publicized, the current crisis between China and Sri Lanka is deep but subtle, and Wang’s visit would resolve all outstanding issues.

These were offers to show that China would stand by Sri Lanka and not allow “outside influences” to ‘interfere’ in its internal matters. It means, China would protect Sri Lanka from others who do politics with Sri Lanka whearas China’s interest is only economical.

Aside from the economic interest, China has demonstrated beyond a shadow of a doubt that it wants Sri Lanka to antagonize other countries that are considered China’s enemies, such as India, the United States, Japan, and Australia, to name a few. These countries are keeping a close eye on China’s activities in Sri Lanka and the Indo-Pacific region, where the Chinese are constructing artificial islands similar to the one they built in Sri Lanka – the Port City.

Between 2020 and 2021, top officials from the United States, China, and Russia visited Sri Lanka. Top Indian officials also met with the Sri Lankan government at a high level and signed several development projects and loan facilities for the country.

In his speech, Wang took stock of international developments and China’s foreign relations during this year, including great endeavors made on nine fronts, and put forth six priorities of Chinese Diplomacy in 2022.

India sent Harsh Vardhan Shringla, the Indian Foreign Secretary, and General MM Narvane, the Indian army chief, to strengthen India’s ties with Sri Lanka. Unlike China, which is concentrating its efforts on becoming the world’s superpower, India has been cautiously cooperating with Sri Lanka, not only on bilateral issues but also on a political level, to ensure that Sri Lanka remains a peaceful country in the region. India wants Sri Lanka to be inclusive of all ethnic groups.

As a result of their shared traditions, culture, and religions, India and Sri Lanka have a strong political relationship. However, China asserts that “others should not interfere in Sri Lanka’s internal affairs.” The strong ties Sri Lanka has with India have either been misunderstood or never understood by China.