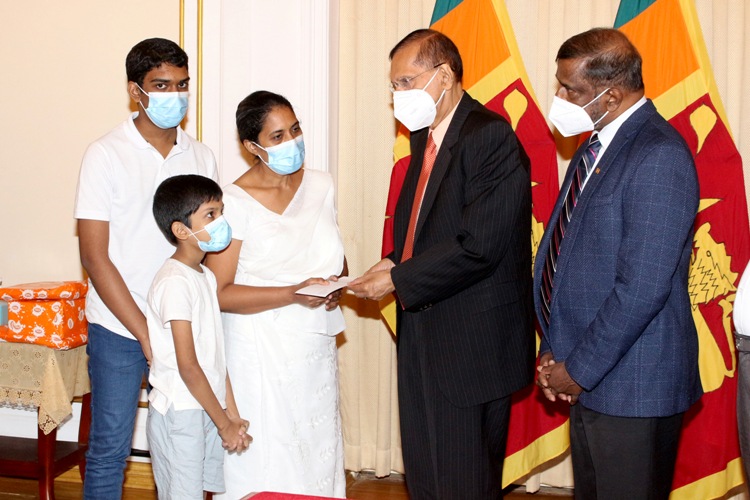 Foreign Minister Professor G.L Peiris, at an event held at the Foreign Ministry today (15), handed over a financial grant to the family of late Priyantha Kumara who was brutally killed by a mob in Sialkot area, Pakistan recently.

Minister Peiris, while expressing his deepest condolences to the family on the tragic death of Priyantha Kumara said that the prime concern at this moment is the future of the two children and the financial security of the family.

In this regard, the Minister stated that he was in discussions with the Sri Lanka Insurance Corporation to obtain assistance for the family of the deceased.

He further stated that he had requested the Pakistan Government to ensure timely receipt of financial benefits from the employer and the Government of Pakistan.

Minister Peiris mentioned that the Acting High Commissioner of Pakistan in Colombo informed that appropriate arrangements have been made in Pakistan to hear the case. The business community in Sialkot area has agreed to provide US$ 100,000 to the family of Priyantha Kumara.

The Foreign Minister further mentioned that Sri Lanka is closely monitoring the developments of the investigation and expecting that those responsible for the death would be speedily penalized by the law and justice will be served.

Foreign Secretary Admiral Prof. Jayanath Colombage and officials of the Foreign Ministry were present at the event. (Colombo Gazette)