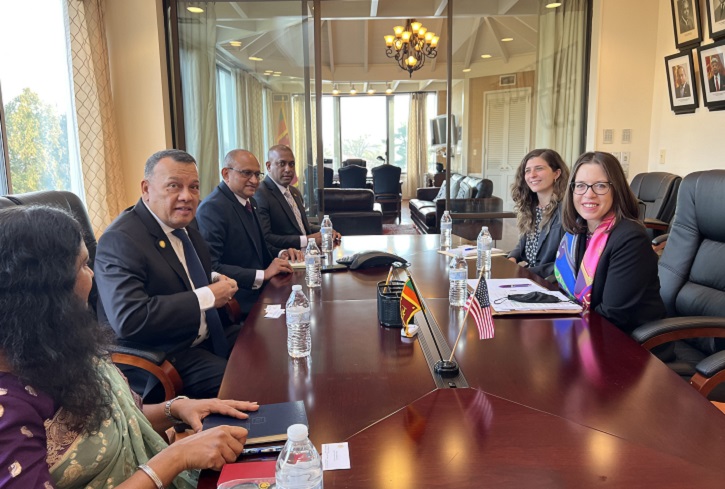 Sri Lanka’s newly appointed Ambassador to the United States of America, Mahinda Samarasinghe has met top US officials in an attempt to boost ties between both countries.

Samarasinghe also hosted a roundtable discussion at the Embassy of Sri Lanka in Washington D.C to mark the International Human Rights Day with key participants of the State Department and former US Ambassadors to Sri Lanka.

He also met Ambassador Kelly Keiderling, Deputy Assistant Secretary, Bureau of South and Central Asian Affairs, to discuss further avenues to strengthen the bilateral partnership between Sri Lanka and the US.

Prior to his appointment, Ambassador – designate Samarasinghe was a former Member of Parliament of Sri Lanka under President Gotabaya Rajapaksa’s Government, and the Sri Lanka Podujana Peramuna Chief Organiser for the Panadura Electorate in the Kalutara District.

Samarasinghe has also represented Sri Lanka at various international forums, institutions and organizations, including as the President of the Committee on the Human Rights of Parliamentarians in the Inter-Parliamentary Union, the International Labour Organization (ILO), the World Health Organization (WHO), the International Telecommunication Union (ITU), and the World Meteorological Organisation (WMO). Most significantly, he led Sri Lanka’s delegation to the United Nations Human Rights Council in Geneva – to Special and Regular Sessions of the multilateral body (2006 to 2014), including to the successful adoption of the Universal Periodic Reviews of Sri Lanka in 2008 and 2012 before the Council. (Colombo Gazette)