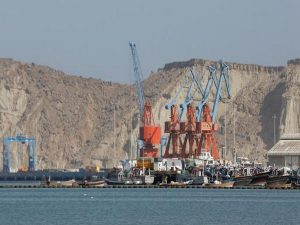 Islamabad [Pakistan], November 29 (ANI): A newly awarded contract for a development project under the China-Pakistan Economic Corridor (CPEC) is in limbo after it was challenged before a Pakistani court.

The contract for the Dhabeji Industrial Zone (DIZ) project near Karachi is facing a petition, stating that the rules of Special Economic Zones (SEZ) were not followed while awarding the contract, Dawn newspaper reported.
The 1,500 acres project, is being executed jointly by the federal, Sindh government and CPEC Authority to enhance the economic prospects in the province.
The provincial government said that since Dhabeji Zone has not been given the status of SEZ, the rules of special economic zones do not apply to it.
Back in February 2020, the Sindh government received bids for the project. Two-month later after the evaluation, one of the bids was declared ‘technically unfit’.
Earlier this month, Pakistan Prime Minister Imran Khan had expressed the hope that all economic zones, including DIZ, would be completed at the earliest.
Khan had also lashed out at the Sindh government for the slow pace of development work in the province.
CPEC has been marred with controversy since the announcement of the USD 46 billion project in 2015. Locals are opposing China’s increasing involvement in Balochistan. They are protesting as the CPEC project has not benefited the people of Balochistan while people of other provinces are enjoying the fruits of the mega project.
This has led to widespread protests as the Chinese are viewed as encroachers who are squeezing out all the wealth from the region. (ANI)