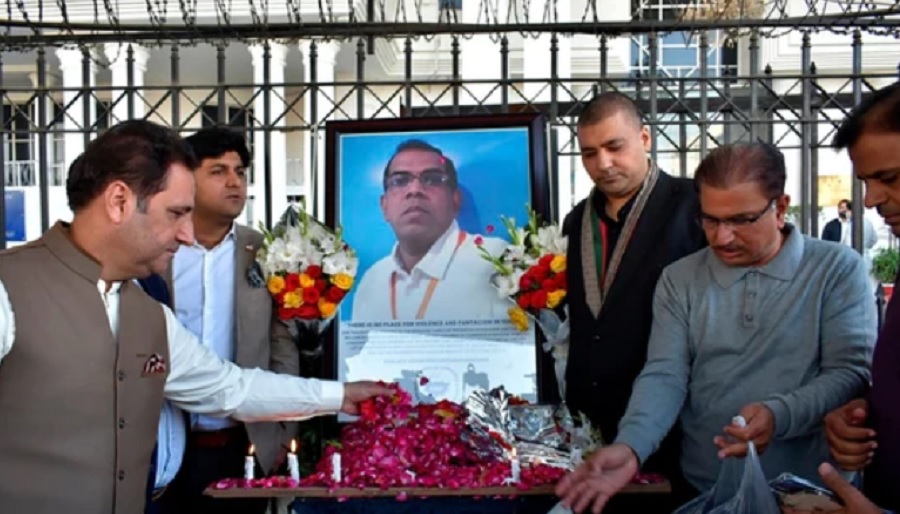 Recently a violent and unruly mob in Sialkot, Pakistanlynched Kumara, a Sri Lankan national before setting his body on fire over allegations of blasphemy which shocked both the Sri Lankan public and the government.

According to a Pakistani official, ‘Kumara allegedly removed and tore a poster of the hardline Tehreek-e-Labbaik Pakistan (TLP) in which Quranic verses were inscribed and threw it in the dustbin.

A couple of factory workers saw him and spread the ‘word’. The official outlined that on hearing what Kumara did, hundreds of men started gathering outside the factory from adjoining areas, most of whom were activists and supporters of the TLP. After facing severe international backlash, Pakistan Prime Minister Imran Khan broke his silence and took cognizance of the incident. Khan called it a ‘day of shame for Pakistan’.

The Pakistani PM highlighted that he was ‘overseeing the investigation’ in the incident, and assured that all responsible will be ‘punished with the full severity of the law’.In the latest update, Imran Khan-led government on detained as many as 100 suspects linked to the case.

Sri Lanka’s Cabinet Minister of Youth and Sports, Namal Rajapaksa described the tragedy as ‘incomprehensible’. He appreciated Pakistan Prime Minister Imran Khan’s promise to bring justice however also added that people ‘should be mindful that this could happen to anyone if extremist forces are allowed to act freely’.

Mob killings over allegations of blasphemy have been very common in Pakistan, where the crime can carry the death sentence.The Sialkot lynching case in Pakistan has shaken the global community to the core. With videos of the brutal murder of the Sri Lankan manager going viral on social media, the incident has once again highlighted the state of minorities in the Imran Khan-led nation.

Pakistani officials believe that he was lynched for allegedly tearing a poster of the Tehreek-e-Labbaik Pakistan (TLP), a hardline organization whose ban was reverted by the Pakistan Government recently. The Imran Khan government was responsible for recently lifting a ban on the TLP after signing a secret agreement. The agreement saw the release of TLP chief Saad Rizvi and over 1,500 ‘activists’ accused of terrorism.

Horrified over the shocking incident, Pakistan is under severe global condemnation. Reacting to the videos, netizens slammed the country for the cold-blooded murder calling it ‘an utter disgrace to humanity’. Netizens also lashed out at PM Imran Khan for the deteriorating law and order situation in the country where radical extremists were running riot.

Twitters have pointed out that the blood of the Sialkot incident’s victim lies on each and every government official that was involved in ‘rehabilitating’ the TLP. When you mainstream radicals, you encourage mob violence. Shame on the Government of Pakistan and Government of Punjab. This is the natural consequence of legitimizing mob violence in the name of religion.

Rene’ Girard, a French sociologist, has given a very elaborate explanation of the problem of mob violence in any society. In his book, The Scapegoat(1986), he has presented the mechanism through which scapegoating proceeds. He is talking about mob violence, which he defines “By collective persecutions I mean acts of violence committed directly by a mob of murderers such as the persecution of the Jews during the Black Death”. The process of scapegoat violence acts in three stages. The first stage is stereo-typing of the crisis, the second stage is the nature of accusation, and the third is the selection of victim. According to him, religious and ethnic minorities, physically weak, physically impaired, poor, the elite, female, the different etc. are the segments of the society who are attributed with the accusations described above (crimes, religious profanity, sexual transgression), and resultantly the source of the social crisis (inflation, loss of jobs, persistent violence); hence, individuals or many of them are punished by the mobs representing the majority in every sense of the word. In his remarks, “Ultimately, the persecutors always convince themselves that a small number of people, or even a single individual, despite his relative weakness, is extremely harmful to the whole of society.

As per recent media reports, there were around twentytwo incidents of mob violence in Pakistanthat can be categorized as lynching. Yearly, it saw a stable trend. It was six (06) in 2014, seven (07) in 2015, eight (08) in 2016, and fourteen (14) in 2017. It makes an average of five point five (5.5) cases per year. Spatially, Punjab province received seven (07), the urban Sindh (Karachi-Hyderabad) got eleven (11), rural Sindh none (00), The Khyber Pakhtunkhwa province three (03), and Baluchistan province one (01) cases out of the total. It is important to note here that only those incidents where at least one killing occurred has been included. Mob violence that resulted in the injuries or those were aborted by the police have not been mentioned here.

Three motivations were found out to be triggering these mob lynching in Pakistan. First, mobs killed victim/s on the allegation of crimes (theft, snatching, kidnapping). Second, mobs had some religious reasons against the victim. Third, victims were targeted on the charges of sexual transgressions. The first type ranked the highest with fifteen (15) such cases over the period of study. Religion was the second biggest trigger with five (05) cases under this head. Obviously, petty criminals, religious minorities and women are the three social groups who constitute the victims of mob lynching in Pakistan under the period of study. In the religious type, committing of blasphemy (against religious persons) and desecration of religious texts were the most often alleged offenses against the victims.

Christians felt the brunt of this type of violence, followed by Ahmadiya (Qadiyani) mostly in the Punjab province. In some cases, fellow Muslims too got killed on the suspicion of blasphemy or desecration. Though, in such cases, the accused would also be declared as ‘Qadiyani’ by the members of raging mob.In Urban Sindh, that topped the list in overall lynching, it was on the charges of petty crimes especially of theft and snatching that most of the lynches happened.

Running and renting out mobs is also an organized business in Pakistan, where the men organizing the mobs insist that they are providing a vital public service and anything is available – at the right price. “One phone call and a hundred people will come, they can throw stones till nothing is left and if that doesn’t work, it costs very little to buy 10 litres of petrol and set things on fire” insiders say.Many militant Islamic organizations have been banned in the Punjab as part of the government’s efforts to curb terrorism and radicalization – but the mob bosses say it is easier to operate behind the scenes, by hiring mercenaries like h, with no direct links or affiliations.

Psychological experts believe that social unrest is on the rise and tolerance diminishing in a country dealing with the impact of decades of terrorism and growing religious radicalism.

As public confidence in the government’s ability to tackle rampant socio-economic problems is eroded, a sense of frustration and anger has emerged. And harnessing that anger to serve ulterior motives appears to have become big business.