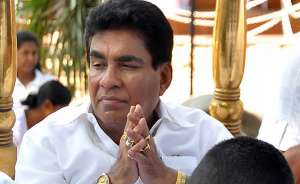 Former Minister Mervyn Silva has demanded the death sentence on the Sialkot murderers.

Silva told reporters that President Gotabaya Rajapaksa must ensure the men accused of murdering Priyantha Kumara are sentenced to death.

He said that Priyantha Kumara was killed in an inhumane manner and so the accused must be dealt with severely.

The former Minister said that Rajapaksa should ensure the Pakistani authorities do not drag the case.

He said that Pakistani Prime Minister Imran Khan should be told to inform the Sri Lankan President in 2-3 weeks that the death sentence has been confirmed on the accused.

Minister Mervyn Silva warned that if the President fails to secure a guarantee then the public may be forced to react.

He said the public have been very patient so far and that is commendable. (Colombo Gazette)