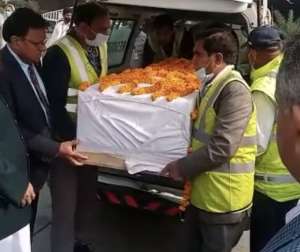 The remains of Diyawadanage Don Nandasiri Priyantha Kumara, who was killed by a mob in Sialkot in Pakistan, was brought to Sri Lanka this evening.

The remains were brought to Sri Lanka on a special SriLankan Airlines flight at state cost.

The remains were received by the next-of-kin at the Bandaranaike International Airport (BIA).

A frenzied mob in Pakistan tortured the Sri Lankan man to death on Friday and then burnt his body in public, accusing him of committing blasphemy.

The incident took place on Wazirabad Road in Sialkot, where workers of private factories attacked the manager, a Sri Lankan national, and burnt his body after killing him.