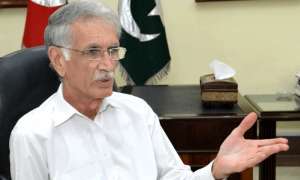 Pakistan Defence Minister Pervez Khattak has played down the killing of a Sri Lankan man in Sialkot saying even “murders take place” when young people get emotional.

Khattak suggested that the ghastly lynching of a Sri Lankan man at the hands of a mob in Sialkot should not be linked to the Pakistan government’s decision to lift the ban on the Tehreek-i-Labbaik Pakistan (TLP).

The TLP was linked to the gory incident by users on social media, but the group distanced itself from the lynching and condemned it.

At a media talk in Peshawar on Sunday, a reporter said that the Sialkot killing had taken place after the government lifted the ban on the TLP, and asked Khattak whether the government was considering an “effective crackdown” against such groups to prevent similar incidents in the future.

In response, the minister said the two issues shouldn’t be linked. “You know the reasons [behind this incident] too. When children … grow up, they become spirited and do things out of emotions. This does not mean ‘this was the result of that action’,” he stressed, saying in Sialkot too some young men had gathered and accused factory manager Priyantha Kumara of disrespecting Islam, which led to the “sudden” lynching.

However, the Minister later took to twitter and condemned the murder and assured justice. (Dawn/Colombo Gazette)