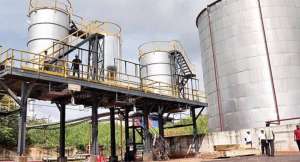 The Sapugaskanda refinery will recommence operations this week, the Ministry of Energy said.

The refinery was temporarily shut down on 15 November to save foreign exchange by suspending crude oil imports.

“I promised to restart Sapugaskanda Oil Refinery within 50 days on the day of closure (15 November). As promised, we restart the refinery on 7 December which is the 22nd day from the closure,” Minister Udaya Gammanpila said.

Gammanpila had said earlier that Sri Lanka was holding talks with several countries in securing financial facilities to meet the financing of fuel imports to the country, adding that Sri Lanka requires $ 350 Mn to import fuel monthly. (Colombo Gazette)