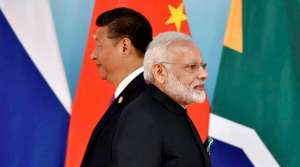 The confusion surrounding the Chinese announcement on Sinosar ‘suspending’ –- or, not withdrawing – from renewable energy projects in three northern islands seems to have exposed avoidable mis-communication within.

The question also arises India as the unnamed cause for the Chinese decision/non-decision, is the only reason, or if Beijing is learning lessons from not-much-publicised popular unrest to its not-so-benign presence elsewhere in the globe just now – the Solomon Islands and Congo, to be precise.

On la affaire northern Sri Lanka, first came the Chinese Embassy tweet that Sinosar was suspending operations. Then came the explanation from Sinosar Hybrid Technology that they had not pulled out. Using a milder term compared to ‘suspending’ operations, the company said they were (only) ‘reviewing’ the situation.

In a way, the two Chinese missives within a day may have exposed the internal tussle within the Beijing Establishment, on competing political and commercial interests. In this also comes the question if Chinese political interests would be better served by Sinosar quitting the Northern Province or if it stuck. Both aligned in targeting a ‘third party’ security concerns, implying none other than Sri Lanka’s larger Indian neighbour.

The Chinese decision to ‘suspend’ work in the North seems to flow from a new realism in Colombo’s commercial dealings with Beijing in recent weeks. First came the decision to decline the pest-infested organic fertilizer, which official Sri Lankan agro-scientists declared unfit for local conditions, hence local consumption. India may have ended up sending in chemical fertiliser, instead, as a part of New Delhi’s ‘Neighbourhood First’ policy – or, even otherwise — in an unexpected quarter and in an unanticipated time-span. But China could not have blamed India for Sri Lankan turning down the Chinese fertiliser.

Then comes the belated Sri Lankan realisation about India’s real and realistic concerns about China’s presence almost at stone’s throw from Indian territory, in southern Tamil Nadu. Under the UNCLOS-authorised IMBL delineating the sea territory between the two nations, India and Sri Lanka are in exclusive possession and also ownership of the Palk Strait that connects – and, not divides – them two.

When New Delhi commenced work on the now-suspended Sethusamudram Project on India’s side of the shared maritime territory, the US declared that the deepening of the seas in those parts would make the Palk Strait international waters, opening up opportunities for American vessels, too, to ply. The Sethusamudram project case is still pending before India’s Supreme Court, where religiosity is a pointer, demanding realignment of the project route, not necessarily the suspension or withdrawal of the same.

Independent of bilateral relations with any nation, including India, the US, had employed its ‘freedom of navigation’ coinage, now acceptable in international for a, to taunt the South Asian behemoth. Yet, the US has not entered the Palk Strait linking India and Sri Lanka to the exclusion of others.

Now, China’s presence in the three outer-lying Jaffna Peninsula islands of Delft, Analativu, Nainativu could trigger a super-power competition for presence and dominance. The fact that China might not have entered the Palk Strait waters is immaterial in terms of geo-strategic concerns fo the US and the rest of the West. This is independent of the real and immediate security concerns of India.

For New Delhi, such concerns centred on China in Sri Lanka are real. It goes back in time, independent of China at present. During the Cold War era, New Delhi had similar concerns about the possible US presence and dominance in Sri Lanka. Hence, the continuing Indian disquiet over the possibility of Colombo granting access to eastern Trincomalee port (including the Second World War vintage oil tank farms), implying the US then, and China now.

Critics of India in Sri Lanka often cite the nation’s sovereignty to argue that New Delhi cannot expect to have its way on which other nations Colombo could deal with and in what contexts. It is an unimpeachable argument, no doubt. Sri Lanka still considers the LTTE as an adversarial terror/militant force and wants the Indian neighbour, too, to stay on course.

India also demonstrated shared security concerns for Sri Lanka when it shared intelligence on the impending Easter serial-blasts in 2019. It is hence not unfair for New Delhi to expect similar concerns from Colombo on India’s security concerns. This is what the two nations, along with common neighbour Maldives, sealed at the meeting of their National Security Advisors (NSA) in November 2020.

The meeting chose Colombo for the secretariat of the new arrangement, indicating how the other two counted on Sri Lanka to act as the fulcrum. The Sinosar agreement for the North came up (only) two months later, in January 2021. Did it send out a wrong message about Colombo’s inability to think for the collective? This is so even granting that Sri Lanka put commercial interests of the self over the security concerns of the collective, or a member therein.

International media opinion, the only available source at present, on public protests in Solomon Islands is divided. Some have said that it owes to the dominance of Chinese businesses that have been around from the 19th century. Others attribute it to domestic economic woes unrelated to China, caused instead by inequities between different islanders. Whatever that be, anti-Chinese riots and arson have become anti-China, too.

In Congo, where multiple armed groups, including those from neighbouring nations, have been fighting for control over cobalt and other mineral reserves in the country, Beijing has since asked all Chinese businessmen to vacate three eastern districts, following the abduction of fellow citizens. The situation is so bad, it would seem, that China has since told citizens that they were living in eastern Congo from now on, on their accord. It implied that they cannot blame Beijing if ill-fate befell them.

The question is if China sees the Solomon and Congo riots as twin triggers to learn from before setting foot on the otherwise volatile northern Sri Lanka. Already, there are periodic, unconfirmed reports of attempts to revive the LTTE. China also knows, so does Sri Lanka, that the trigger is no more in New Delhi, but in the West.

If nothing else, the virtual government of the ‘Trans-national Government of Tamil Eelam’ (TGTE), considered the democratic face of the LTTE, is located in the West and its branches and activities are spread mostly across the western horizon, from Australia to Canada, via Europe, the UK and the US. And China’s presence in the North is an issue that they all could use to revive political protests, including militant protests.

If someone were to recall how LTTE’s slain boss Prabhakaran would not accept even constitutionally-mandated and otherwise acknowledged Sri Lankan ‘suzerainty’ over the Tamil areas, in the North and the East, they would have suspected from day one if it was worth China’s while to go to the North. It is more so when the general conviction is that China is close to Colombo, whoever is in power, and more so the incumbent Rajapaksas, whom the Tamils in general and the Diaspora in particular, love to hate.

Did you see an India hand anywhere there, as the ‘third party’ or otherwise?