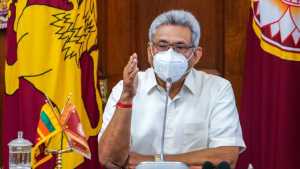 The President said that he was deeply saddened by the brutal assassination of Priyantha Kumara, a Sri Lankan professional who worked at a factory in Pakistan.

“This act of barbarism is a great shock to the Sri Lankans as well as to all those across the world who value humanity,” the President said in a statement.

He said that as an ardent friend of Pakistan, Sri Lanka commends the actions taken by the Government of Pakistan led by Prime Minister Imran Khan to ensure justice, immediately after this brutal assassination.

“The Sri Lankan Government and the people of Sri Lanka look forward with great confidence on the future steps that will be taken by the Government of Pakistan in this regard,” the President said.

He also urged the Government of Pakistan to ensure the safety of all other Sri Lankans living in Pakistan.

“The Foreign Ministry and the Sri Lankan High Commission in Pakistan are currently taking action based on the instructions given by Prime Minister Mahinda Rajapaksa and I on the immediate course of action to be taken upon hearing of the incident,” the President said.

He said that extremist activities of any nature create grave chaos in a society. Therefore, such incidents further confirm that the world must act with the same objective when taking action against extremism.

The President said that he and the Government and the Sri Lankan people are with Priyantha Kumara’s family members who are deeply saddened and shocked by this unfortunate incident. (Colombo Gazette)