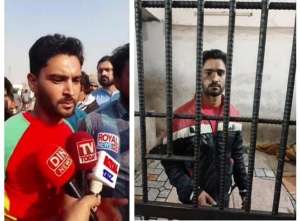 Over 100 people have been arrested in Sialkot after a mob of factory workers and others killed and burned the body of a Sri Lankan national over alleged blasphemy allegations.

The police have formed ten teams to identify and arrest the persons involving in the lynching of the Sri Lankan national.

The Sri Lankan national was working as a senior manager at a leading Sialkot factory that manufactures and exports sports products. The factory is located at the Wazirabad Road.

Punjab Government Spokesman Hasaan Khawar told journalists that over 50 people have been arrested and more were being identified through CCTV footage.

Punjab police later said the number of arrests had increased to over 100.

The Police tweeted two photos of an accused, named Farhan Idrees, who earlier appeared on one of the viral videos and supported the violence against the Sri Lankan national. One of the photo tweeted by the Police shows him behind bars while the other is from the viral video.

The tweet said Punjab Inspector General of Police (IGP) was overseeing the investigation and and raids were being carried out to arrest other suspects.

Hasaan Khawar earlier said that action will be taken against each and every individual involved in the attack. “We have begun an impartial investigation and justice will be served in this incident,” he said. (Courtesy SAMAA TV)