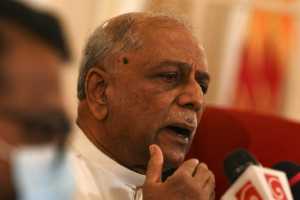 The murder of a Sri Lankan man in Sialkot was condemned in Sri Lanka’s Parliament today.

Leader of the House Dinesh Gunawardena said that the Government condemned the brutal murder.

Gunawardena said that the Sri Lankan Government appreciated the stand taken on the incident by Pakistan Prime Minister Imran Khan.

Minister Bandula Gunawardena said that Sri Lanka, as a country, condemns the incident.

He said the incident threatens the diplomatic relations between Sri Lanka and Pakistan.

MP Shantha Bandara said that the incident raises concerns over the safety of Sri Lankans in Pakistan.

He urged the authorities to take steps to ensure the protection of all Sri Lankans in Pakistan.

The incident took place on Wazirabad Road in Sialkot on Friday, where reportedly the workers of private factories attacked the export manager, a Sri Lankan national, of a factory and burnt his body after killing him, the Dawn reported.

Sialkot district Police officer Umar Saeed Malik said the man was identified as Priyantha Kumara, who was in his 40s.