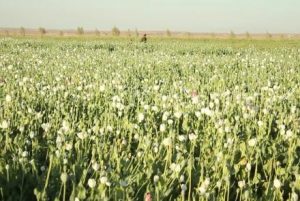 The farmers in the southern province of Helmand say that they will cultivate opium as its products make better profits than other crops, especially as the price of opium has increased compared to the previous years.

“When we plant the seeds, it takes six to seven months to grow fully. The people here are using the white flower seeds,” said a Samiullah, a farmer.

Officials of the Islamic Emirate said they are trying to facilitate ways for the cultivation of poppy alternatives.

“In cooperation with several international organizations, we want to facilitate alternative ways for the people to cultivate other crops in order to prevent smuggling and narcotics in Afghanistan,” said Inamullah Samangani, deputy spokesman of the Islamic Emirate.

The UNODC said in a recent report that the price of opium has recently surged. According to UNODC findings, income from Afghan opiates amounted to US$ 1.8 billion to 2.7 billion in 2021 inside Afghanistan, but much larger profits are made in the illicit drug supply chains outside the country. Increased political uncertainty in Afghanistan since August 2021 is driving up opium prices, which almost doubled in August compared to May, said UNODC.

The UNODC said that around 300 tons of pure heroin was expected to be produced in Afghanistan this year.

“If there is no cooperation with the Islamic Emirate on the international level, the poppy cultivation will be a big challenge for Afghanistan and the world,” said Atif Mukhtar, head of the strategic studies center.

The UNODC also warned that alongside rising opium and heroin production, methamphetamine manufacture in Afghanistan, using the wild ephedra plant as a precursor, has sharply increased in recent years.

Helmand is said to be producing a significant amount of the world’s opium. Its residents have become well-experienced in its cultivation.

The lack of markets for Afghanistan’s fresh and dry fruits is said to be a cause in the rise of poppy growth. Many neighboring countries have closed their borders with Afghanistan. -(TOLONews)