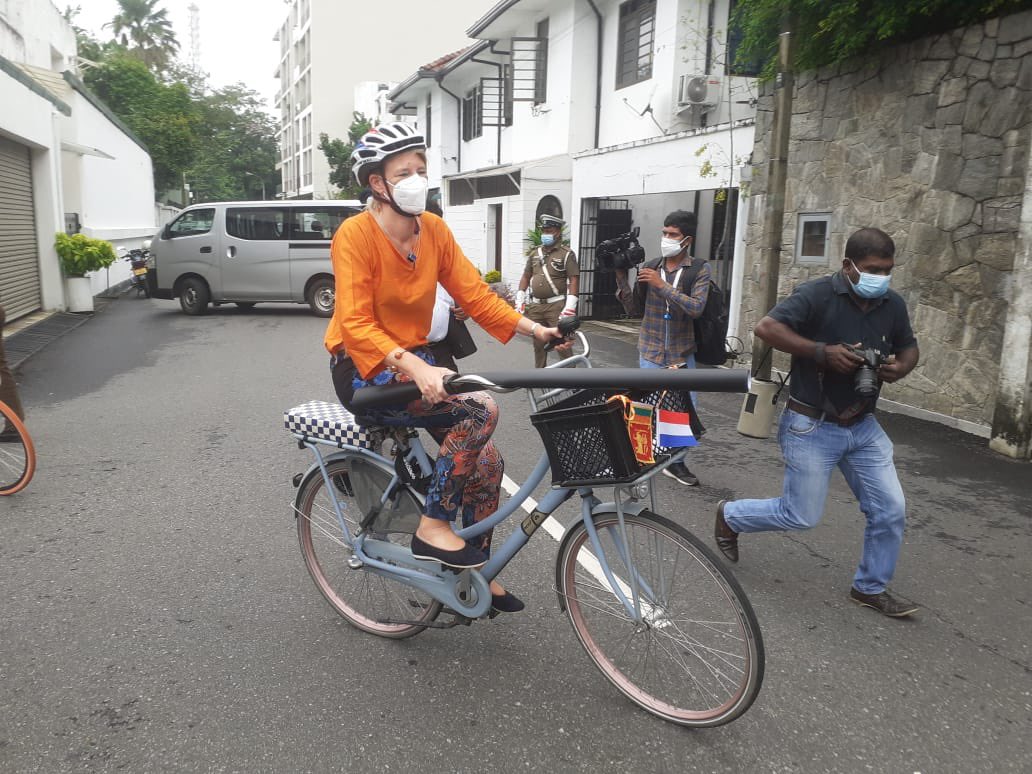 A group of diplomats cycled around Colombo today delivering banners to raise awareness on violence against women.

The Ambassador of the Netherlands to Sri Lanka Tanja Gonggrijp launched the campaign by travelling on a bicycle to other Embassies.

Diplomats from those missions, including the British and Canadian High Commissioners, later joined the campaign on bicycles.

The “Orange The World” campaign accompanies 16 Days of Activism Against Gender-Based Violence.

The 16 Days of Activism against violence against women and girls is an international campaign that takes place each year. It commences on 25 November, the International Day for the Elimination of Violence against Women, until 10 December, Human Rights Day. It was originated by activists at the first Women’s Global Leadership Institute in 1991 and this year marks its 30th anniversary.

Over 6000 organizations in approximately 187 countries have participated in the Campaign since 1991, with a reach of 300 million people. It continues to be coordinated each year by the Center for Women’s Global Leadership (CWGL) and is used as an organizing strategy by individuals, institutions and organizations around the world to call for the prevention and elimination of violence against women and girls.

In support of this civil society initiative, under the leadership of UN Secretary-General António Guterres, the United Nations Secretary-General’s UNiTE by 2030 to End Violence against Women campaign (UNiTE Campaign), launched in 2008, is a multi-year effort aimed at preventing and eliminating violence against women and girls (VAWG) around the world calling for global action to increase awareness, galvanize advocacy and create opportunities for discussion about challenges and solutions.

As in previous years, the colour orange will be used to represent a brighter future, free from violence against women and girls, as a unifying theme running through all the global activities of the UNiTE Campaign. (Colombo Gazette)