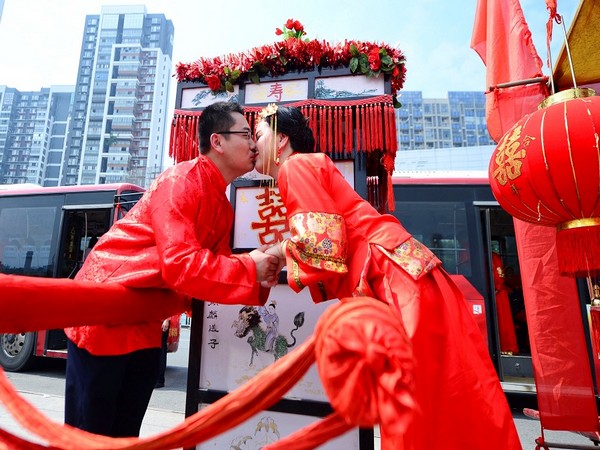 Marriage rates in China are continuing to fall in spite of policies from the ruling Chinese Communist Party (CCP) aimed at encouraging people to have more children amid falling birthrates, suggesting that the next generation of young people in China has other things on its mind.

According to the civil affairs ministry, the number of newly married couples has fallen for the first three quarters of 2021, when compared with figures for the previous year, with just 1.72 million couples tying the knot in the third quarter, a new quarterly low.

Evidence suggests the numbers are continuing to show a long-term downward trend that can’t just be linked to the COVID-19 pandemic, and have more to do with a lack of trust in the government’s promises to ease the burden on couples who choose to raise children.

A recent survey by the CCP’s Youth League found that for Gen Z — young people born between 1995 and 2009 — around 34 percent of nearly 3,000 urban respondents no longer regard finding a life partner as inevitable.

The survey cited United Nations population data as saying that only 69.2 percent of 20-29 year-olds are likely to be married by 2030, eight percentage points lower than the 2013 figures.

“The willingness of Gen Z to get married is showing a downward trend,” an Oct. 8 report in the CCP’s official Guangming Daily said. “Further analysis found that women’s willingness to marry is significantly lower than men’s.”

According to the survey, more than 43 percent of women said they would either not marry, or were unsure if they would. Uncertainty about marriage was also linked to economic prosperity, with young people in richer cities more likely to want to stay single than those in smaller cities.

“The more developed the economy, the more people actively choose to be single,” the report said. “As economic development continues, the number of young people not keen on partnering up may continue to rise.”

Young people who took part in a separate, Beijing-based, survey cited problems with finding affordable housing as a major obstacle, in a culture where home ownership is widely seen as a prerequisite for couplehood, the report said.

Others cited the “high economic cost of marriage,” and “the high cost of childbirth and bringing up children,” the paper said.

“Some young people yearn for freedom and an unfettered life, and think that an interesting single life is better than marriage,” it said. “[They] devote more time and energy to personal career development and hobbies.”

Others felt relationships were too much work.

“I don’t want anyone to affect my emotions, and I don’t want to deal with the emotions of another person when I am busy and tired,” one respondent told the survey.

The article blamed individualism for influencing Gen Z, who have “greater self-awareness and independence” than earlier generations, prompting them to push back against social pressure to cope with excessive work schedules, exorbitantly priced weddings, and the psychological pressure of steering children through a highly competitive education system.

“Why aren’t they attracted by [these incentives] or trust them? It will take time for any benefits from these policies to show themselves, because population growth requires a long timespan with no immediate results,” Si said.

Rights activist Ma Yongtao said CCP policy is largely aimed at protecting the interests of the ruling class, and has failed to address many of the deep-seated issues young people face.

“There have been some new slang words appearing recently in private and online, like ‘lying down,’ ‘turning inward,’ and ‘leeks,” he said.

“Leeks” is a term used to refer to the general population as a harvestable or disposable resource to be used by the authorities for their own purposes.

“People know they are leeks, which is why they are choosing to lie down,” Mao said.

Meanwhile, the CCP has refused to move ahead with marriage equality for LGBT+ groups, who are increasingly moving away from the public sphere amid growing political restrictions on public speech.

The group had campaigned for LGBT+ rights, including same-sex marriage, and its founder Peng Yanzi once went undercover at an electroshock “conversion therapy” facility, successfully suing it.

The group had also brought landmark cases to the court, including those granting custody rights to non-traditional families.