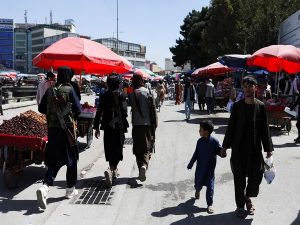 Kabul [Afghanistan], November 16 (ANI): At least 24 million Afghans are facing an acute hunger crisis in Afghanistan as the country suffers a combination of drought and economic meltdown.

The World Food Program in a report issued recently said the combination of drought and economic meltdown caused the Afghan families to suffer from hunger ahead of the cold weather, Tolo News reported.
“The WFP started efforts to provide food and other aid for 24 million people, that [the program] will run in 2022. As our assessment shows, the situation is critical in Afghanistan,” said Wahidullah Amani, spokesperson for WFP in Afghanistan.
Officials of the WFP in Afghanistan also said that the office is attempting to provide humanitarian aid to 24 million Afghans across the country.
Meanwhile, the Afghan families, who were displaced during the turmoil between the Taliban and the Afghan government, have also been complaining about the lack of basic needs at the displaced person camps in Kabul.
Gul Uzar, a mother of six children living in a tent, said she is not able to provide food for her children.
“My children are searching for food door-to-door, they find nothing most days. We are living in desperation, it is a critical situation here,” she told TOLOnews.
Besides, the Taliban has said that the caretaker government formed by them, in cooperation with supporting agencies, is working on a plan to prevent the humanitarian crisis in the country.
“With international agencies and the WFP, we are planning to stop the occurring economic crisis in Afghanistan,” said Ahmadullah Wasiq, deputy spokesman of the Taliban formed government.
Three months into the Taliban takeover and Afghanistan is the embodiment of a country on the fringe of falling apart amid devasting economic crisis hitting every Afghan hard.
Writing for news aggregator Knewz, Australian journalist Hollie McKay highlighted how the
Afghani currency is devaluing with every passing day. “Three months ago it stood around 73 Afghanis to one U.S. dollar. Three months on, it has crumbled to around 92.”
As Afghanistan is currently experiencing one of the world’s worst humanitarian crises, one million children are also suffering from malnutrition in the country. -(ANI)