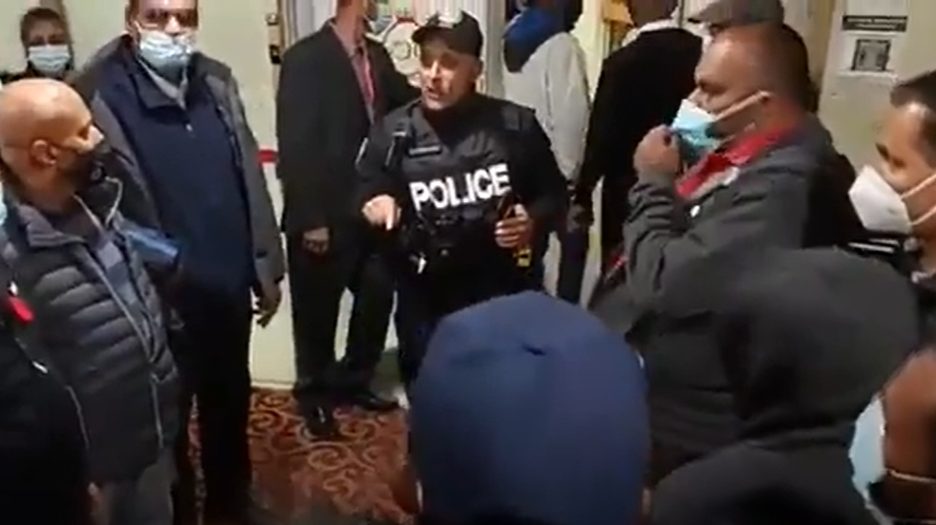 A meeting held in Canada attended by Tamil National Alliance (TNA) MPs M.A.Sumanthiran and Shanakyan Rasamanickam, was disrupted by a group of LTTE supporters yesterday (Saturday).

The LTTE supporters had protested outside the venue carrying LTTE flags, demanding a separate state for the Tamils, and rejecting the TNA’s push for a political settlement to Sri Lanka’s ethnic question.

The group initially gathered outside the venue where a public meeting organized by TNA Canada was taking place.

The meeting was being held to brief members of the Tamil community in Toronto about ongoing diplomatic efforts to push for a political settlement that devolves power to the island’s Tamil minority.

The Toronto Police had to be called to the scene after the demonstrators waving LTTE flags stormed the meeting hall and disrupted the proceedings.

The protesters claimed they did not want a political settlement and insisted that a separate state of Tamil Eelam was the only solution to the Tamil national question.

Focusing their anger on MP Sumanthiran who has faced similar protests from Tamil extremists overseas in the past, the demonstrators held banners accusing the TNA spokesman of being a “Sinhala patriot” who wanted to live with the Sinhalese people in Sri Lanka.

Sumanthiran had also led a TNA delegation to Washington DC last week to brief high-ranking officials at the US Department of State. (Colombo Gazette)

Human rights central to US foreign policy in Sri Lanka