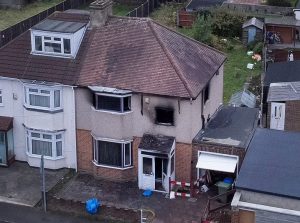 A Sri Lankan woman, her mother and two young children have been killed in a fire in London.

The Daily Mail reported that the Sri Lankan woman, named by relatives as Niruba, was killed along with her one-year-old daughter Shasna, four-year-old son Thabish and her own mother in the fire at her home in Bexleyheath, south-eat London, on Thursday night.

A brother-in-law escaped the flames by jumping from the top floor and breaking his legs.

The touching family photograph released this afternoon shows Niruba and her mother with the two children at a family event.

Last night the children’s devastated father, Yogan Thangavadivel, was too upset to talk about the tragedy. He was being comforted by a string of relatives at his sister’s home two miles from the scene of the tragedy in Bexleyheath, south east London.

Yogan, who works in an off licence, received a heart-breaking call from his wife at around 8.30pm on Thursday telling him their home was on fire. But the line went dead and he arrived back at the property to find his entire family had died.

He was later seen ‘screaming and crying’ and collapsing on the ground outside the house as fire crews worked to retrieve their bodies.

Neighbours said they watched helplessly as the blaze tore through the semi-detached home after starting downstairs.

A faulty fire alarm may have led to the devastating inferno, it was claimed, as police and fire investigators probe why no alert was sounded after suggesting the was not suspicious.

The young children are believed to have died in their beds while their mother was hauled out of an upstairs window at the property but could not be saved.

The victims are believed to have moved to the area three months ago, after the £425,000 property was taken off the market.

A group of relatives – three women and two men – broke down in tears on the road this morning and were comforted by police in front of the blackened 1930s three-bed.

Neighbours and well-wishers were also laying flowers at the scene, with one saying: ‘My heart aches for this loss of precious life to your family.’ (Colombo Gazette)