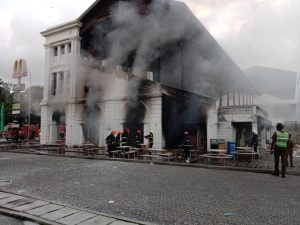 A gas leak is suspected to have caused the explosion at a restaurant at the Racecourse Sports Grounds building in Colombo today.

The Police said that there were no deaths or injuries caused by the explosion and subsequent fire.

The Police media unit said that the explosion occurred at a local outlet of an international fast food chain located on the ground floor.

The explosion is believed to have occurred at the McDonald’s outlet, located on the ground floor of the building.

The Police said that multiple investigations have been launched over the explosion which caused extensive damage to the building. (Colombo Gazette)

A gas leak is suspected to have caused the explosion at the Racecourse building this morning #Srilanka #lka #Racecoursebuilding pic.twitter.com/mZ3TLggRfx