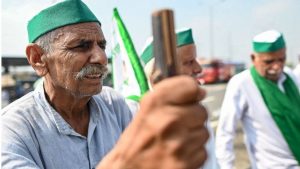 Indian PM Narendra Modi has announced the repeal of three controversial farm laws after a year of protests.

Thousands of farmers had camped at Delhi’s borders since last November and dozens died from heat, cold and Covid.

Farmers say the laws will allow the entry of private players in farming and that will hurt their income.

Friday’s surprise announcement marks a major U-turn as the government had not taken any initiative to talk to farmers in recent months.

And Mr Modi’s ministers have been steadfastly insisting that the laws were good for farmers and there was no question of taking them back.

Farm unions are seeing this as a huge victory. But experts say the upcoming state elections in Punjab and Uttar Pradesh – both have a huge base of farmers – may have forced the decision.

The announcement on Friday morning came on a day Sikhs – the dominant community in Punjab – are celebrating the birth anniversary of Guru Nanak, the founder of Sikhism.

In his nationally-televised address, Mr Modi said the farm laws were meant to strengthen the small farmers. “But despite several attempts to explain the benefits to the farmers, we have failed. On the occasion of Guru Purab, the government has decided to repeal the three farm laws,” he added.

Narendra Modi’s decision to repeal the contentious farm laws is, at once, a strategic and political move and a belated admission of the government’s haste and high-handedness.

The laws had whipped up an unprecedented firestorm of protests in the states of Punjab and Uttar Pradesh and posed a real challenge to Mr Modi. They had mobilised farmers and civil society in Sikh-majority Punjab and spread to parts of Uttar Pradesh, states which will see key elections early next year.

The BJP, which had not anticipated such a blowback, has been trying hard to placate the Sikhs. Much of its executive meeting earlier this month was devoted to assuaging the community’s sentiments: increasing farm budget and crop prices, re-opening a historic corridor to one of Sikhism’s holiest shrines in Pakistan, a fresh probe to punish the guilty of 1984 anti-Sikh riots in Delhi.

The government was clearly getting jittery about the growing alienation of the Sikh community over the laws. History holds grim lessons in Punjab, a strategic border state: a violent separatist movement in the 1980s was fuelled by similar estrangement of the community.

By repealing the laws, Mr Modi hopes to regain the confidence of the farmers in general and Sikhs in particular. It would also boost the BJP’s chances in the polls.

As for those who had supported the reforms, it is again a salutary lesson that good economics often makes for poor politics. (Courtesy BBC)