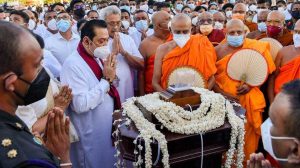 A heated exchange took place in Parliament today over the green-light given for a religious event held in Anuradhapura with the participation of President Gotabaya Rajapaksa.

Samagi Jana Balawegaya (SJB) Parliamentarian Rohini Kumari Wijerathna told Parliament today that the Government cracked down on a protest staged by the SJB this week.

However, she said a large number of people attended the “Sanda Hiru Seya” religious event in Anuradhapura yesterday.

The MP asked if there was no threat of the coronavirus spreading as a result of the “Sanda Hiru Seya” religious event.

President Gotabaya Rajapaksa and Prime Minister Mahinda Rajapaksa were among a number of people who attended the event.

He said that the event was held to promote peace and reconciliation.

However, MP Rohini Kumari Wijerathna said that Covid does not choose between protests and religious events.

Semasinghe said that the opposition has some form of anger towards Budhism.

An exchange of words continued over the issue between Government and opposition MPs. (Colombo Gazette)