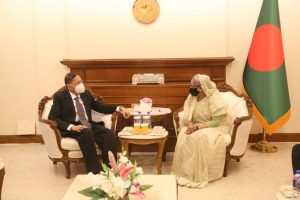 Minister Professor Peiris briefed the Prime Minister of Bangladesh on Sri Lanka’s success in containing the COVID 19 pandemic and on a wide range of current issues.

Particular attention was paid to progress towards a Preferential Trade Agreement – in respect of which negotiations at the official level have already commenced – and cooperation in the field of shipping.

The Prime Minister described to Minister Professor Peiris initiatives taken by her Government to embark on an extensive digitization programme, and to enhance the disposal income of farmers. Increased airline connectivity between Colombo and Dhaka, and tourism sectors was also discussed.

Minister Professor Peiris in Dhaka to assume the Vice-Chair of IORA, at the 21st Meeting of the Council of Ministers. (Colombo Gazette)