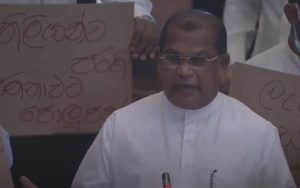 The Samagi Jana Balawegaya (SJB) staged a protest inside Parliament today against the harassment faced at the hands of the Police yesterday.

The SJB accused the Police of preventing a large number of protesters from reaching Colombo yesterday (Tuesday) to take part in a rally against the Government.

SJB General Secretary Ranjith Madduma Bandara said that the Police was used yesterday to do politics.

He told Parliament that the Police blocked buses transporting protesters to Colombo.

The MP said that the court had not banned the protest but the Police decided to act on their own.

Ranjith Madduma Bandara alleged that a youth who was to attend the protest had also died after being assaulted by the Police.

The protest was staged against the Government and was conducted on the main road at Galle Face.

Ranjith Madduma Bandara said that the SJB will stage more protests against the Government.

Ahead of the protest the Police had also closed most public parking spaces in Colombo to prevent vehicles used by the protesters from being parked at those locations. (Colombo Gazette)