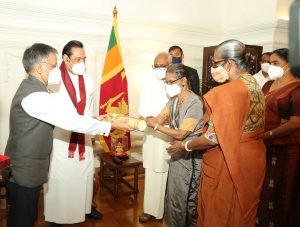 The ‘Padma Shri’ Award, one of the highest civilian honours of India, was delivered to Dr. Vajira Chitrasena today.

In a ceremony held at the Temple Trees, in the presence of Prime Minister Mahinda Rajapaksa, the High Commissioner of India in Sri Lanka, Gopal Baglay delivered to Dr. Vajira Chitrasena the ‘Padma Shri’, Award conferred upon her by the President of India for the year 2020.

On November 08, 2021, a ‘Padma Awards Investiture Ceremony’ was held at Rashtrapati Bhawan, New Delhi at which the President of India presented the Padma awards to the awardees for the year 2020 in the presence of the Vice President, the Prime Minister of India and other dignitaries.

Two eminent personalities from Sri Lanka, Dr. Vajira Chitrasena and Late Prof. Indra Dassanayake were conferred with the ‘Padma Shri’ for their seminal contributions in the field of dance, and literature and Education respectively.

Dr. Vajira Chitrasena is a veteran traditional dancer, choreographer and teacher. For her achievements, she has been adorned with one of Sri Lanka’s highest national awards ‘Deshabandu’, among many others. Dr. Vajira’s unique contributions to enriching India-Sri Lanka relations through the promotion of dance and blending the art forms of both countries, especially Kandyan and Odissi have been honoured with the ‘Padma Shri’. Since Dr. Vajira Chitrasena could not travel to India to accept the ‘Padma Shri’, the High Commission of India facilitated the handing over of the award at Colombo.

The other recipient of the ‘Padma Shri’ Award, Late Prof. Indra Dassanayake was a renowned Professor of Hindi at Kelaniya University. She had a close association with India as she was born in India and was an alumnus of the University of Lucknow. Her daughter, Ms. Vathsala Dassanayake Ishtaweera received the ‘Padma Shri’ at New Delhi from the President of India.

The Padma Awards are one of the highest civilian honours of India announced annually on the eve of Republic Day. The Awards which are given in three categories, Padma Vibhushan, Padma Bhushan and Padma Shri, seek to recognize achievements in all fields of activities or disciplines where an element of public service is involved. This year’s Padma Awards have celebrated the accomplishments and excellence of grassroot level achievers, and have, therefore, been hailed as the “People’s Padma”.

Recognition of the personal accomplishments of Dr. Vajira Chitrasena and Late Prof. Indra Dassanayake by the Government of India attests to the abiding cultural ties between India and Sri Lanka. Through their pioneering contributions, Dr. Chitrasena and Prof. Dassanayake have been instrumental in further strengthening the people-to-people ties between India and Sri Lanka. W.D. Amaradeva, Sri Lanka’s celebrated music maestro, was conferred ‘Padma Shri’ in the year 2002. (Colombo Gazette)