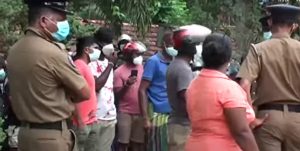 Two policemen have been interdicted over the death of a man while in the custody of the Panamure Police.

A tense situation arose today after area residents surrounded the Police station and staged a protest over the death of the man.

The 38-year-old man, a father of three, had reportedly hanged himself inside the Police cell.

The Police said the suspect was arrested last night following complaints made by the family.

According to the Police, the victim had assaulted his wife and daughter.

The Police said that the man had hanged himself in the cell and was pronounced death on admission to hospital.

However, area residents suspected foul play and protested over the death of the man. (Colombo Gazette)