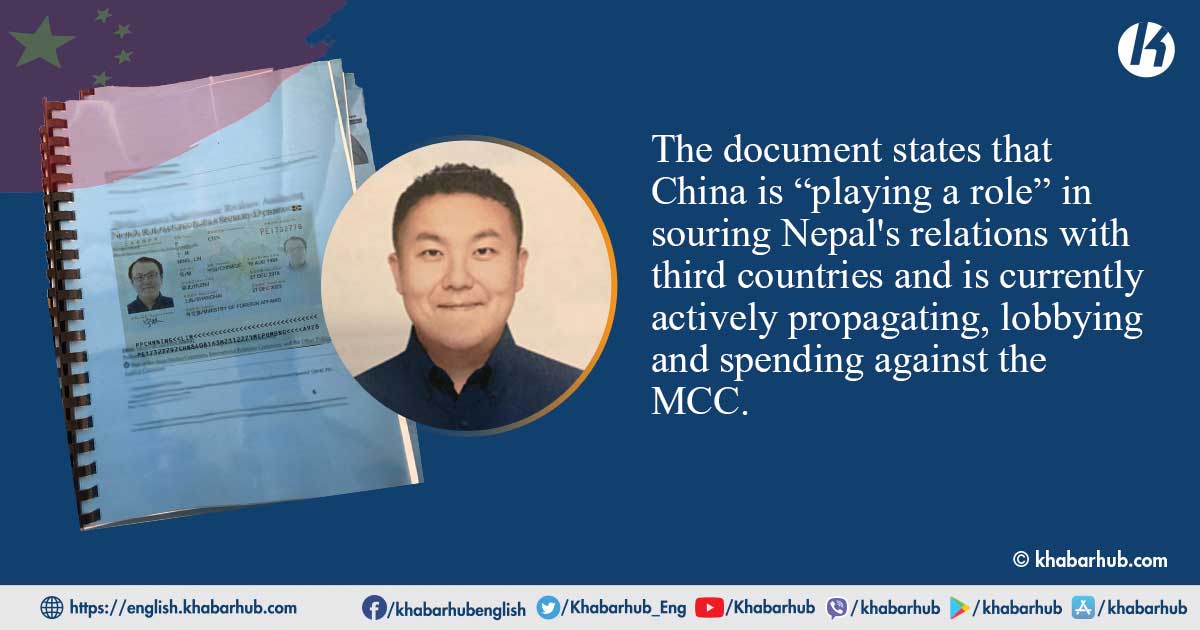 At a time when the fate of the United States grant assistance Millennium Challenge Corporation (MCC) Compact is about to be decided — whether to enter implementation phase by parliamentary ratification or to send the grant back, Khabarhub has obtained a highly confidential report that reveals a covert eleventh hour involvement of a Chinese intelligence agency to stop the Compact from getting passed in Nepal.

Chinese national Ning Lin’s name features at the top of the security authorities’ list (obtained by Khabarhub under strict anonymity of not revealing the security agencies’ identity) of those involved in crafting anti-MCC rhetoric in Nepal.

According to the secret report, Lin, (also known as “Oscar Ning”), a Chinese intelligence agency (MSS) official, carries two passports (PE 0350392, PE1732779) and is said to have come from the Chinese province of Hubei.

The 50-page document — obtained by Khabarhub on Chinese intelligence activities in Nepal — contains more than five pages of details about Lin, including his activities, connections, contacts, mechanism, names of Nepali leaders and journalists.

“Our months-long investigation has confirmed that he is from the MSS and that the details will be made available to top government officials soon,” the source told Khabarhub, insisting anonymity.

Nepal’s security authorities, who had been investigating the Chinese spy network for quite a long time, have recently prepared the report.

The document states that China is “playing a role” in souring Nepal’s relations with third countries, particularly with the United States, and is currently actively propagating, lobbying and spending against the MCC.

Vijay Kant Karna, a political analyst and former ambassador to Denmark, dubs this as a blatant example of Chinese aggressive interference in Nepal.

“Nepal has been caught in a geopolitical rivalry of late,” Karna told Khabarhub. “And the increasing Chinese activities in Nepal is the result of this,” he said criticizing such activities.

Karna further added that no country should speak against another country’s affairs when it comes to development. “MCC is required for a country like Nepal.”

The document, obtained by Khabarhub on the condition of confidentiality and anonymity, has covered in detail the Chinese intelligence apparatus, its modus operandi inside Nepal, and the people involved in it.

The report also includes details of intelligence officials working as diplomats, journalists, and even businessmen. Some of the details that are yet to be verified are also mentioned in the “confidential” document.

The 50-page confidential intelligence document also details all of China’s intelligence priorities, objectives, networks, and individuals in Nepal. The details of the past are also mentioned in the document.

Political analyst Ganesh Mandal said that the Nepal government should cancel Belt and Road Initiative (BRI) if it does not want to accept MCC.

“Since Chinese are carrying out activities in the name of BRI, why should we allow them to do so?” he asked.

Meanwhile, according to the report, Oscar Ning is also found to be inciting anti-MCC propaganda with greater ambitions to defame the United States in Nepal.

Identified by the security authorities as the main propagandist against MCC, Ning Lin, became even more active after Nepal’s Supreme Court issued a mandamus to appoint Sher Bahadur Deuba as Prime Minister, the secret report said.

Nepali security and intelligence officials warn that the rapid advance and increased Chinese intelligence volume could even play a role in changing Nepal’s political proposition.

The Chinese are actively influencing and spending on Nepali politicians, journalists and even businessmen lately besides intelligence gathering.

The document also states that he has been aggressively lobbying against MCC in Nepal.

An intelligence officer, who preferred strict anonymity, told Khabarhub, “We have been monitoring and noticing significant acceleration of Chinese activities in Nepal on multiple fronts, particularly through businessmen, academics & journalists.”

The official added, “We do not have a concern about China’s legitimate activities but we cannot remain ideal when it comes to Chinese covert activities targeting our relationship with other friendly countries.”

According to the official, they have evidence about what Chinese are up to, and are waiting for high-level government permission to dismantle such networks.”

“We are simultaneously monitoring the patterns of foreign intelligence activities, its methods, modus operandi, and what Chinese intelligence is doing here is absolutely unacceptable,” the official said.

“We have kept a record of increasing political meetings between Chinese diplomats and intelligence officials in recent months, and we are aware of their motives. However, their influence and advice to Nepali politicians in internal affairs are alarming,” the official added.

Nepal is not an exception to China’s MSS activities

A Chinese lady Qing Shi (30) who the police said had links to the Chinese Intelligence agency Ministry of State Security (MSS) and her Nepali associate Sher Singh, also known as Raj Bohra (30), were also arrested along with Sharma.

The NID has also been examining the number of “Chinese influence activities” in Nepal along with other foreign Intel agencies.

According to a retired NID official, Chinese engagement in media has significantly increased after 2018.

“Government should ensure a counter-foreign-interference strategy or formulate a response policy on foreign meddling in Nepal,” he added.

A security official said that they have been continuously monitoring all Chinese activities here after the current government led by Prime Minister Deuba took charge.

“We focused on foreign intelligence activities collection for last three years under the leadership of KP Sharma Oli’s tenure. We have received significant mandate and resources during that time,” the retired official said.

A NID high-ranking officer, who preferred to speak to Khabarhub on condition of anonymity, said, “We are extremely frustrated and disappointed with the political leadership because I have evidence of leaders meeting with foreign intelligence officials, receiving gains as our political leadership is least bothered of national interests, foreign intelligence activities.”

Another frustrated officer who exposed this information through Khabarhub, said, “We are all set to brief the high-ranking government authorities, including Prime Minister and Home Minister, that Chinese espionage threat has been massive now than any time in the country’s history.”

Analyst Arun Subedi says, “China, being a good friend of Nepal, should understand the sensitivity of diplomatic, economic and diasporas’ interests with other countries.”

The activities of the Chinese intelligence agencies against the MCC are regrettable, he said.

“The question is whether the activities of MSS have come in the form of overturning and from this the Chinese seem to have gone to the point of view of the Five Finger Theory of the situation of 1952?”

Meanwhile, political analyst Saroj Mishra says that MSS and 610 Office have been active in Nepal under China’s long-run strategy and have been working towards “controlling” Nepali mentality, security, politics, diplomacy, technology and well-planned propaganda and lobbying against MCC.

The MSS has been active in disseminating misinformation against MCC and has been engaged in political lobbying in Nepal.

“If the activities of MSS are not controlled on time, the time may even come for Nepali authorities to seek permission from MSS before taking any step.”

He said it is sad on the part of the government to not control such activities, including cybercrimes, despite being aware of such involvements. “Nepal needs to be extremely cautious about this,” he said.

Likewise, senior journalist Yugnath Sharma argued that the government should not backtrack when it comes to endorsing MCC.

“It is the government that signed the Compact,” he said adding, “If it does not endorse MCC, besides defaming the country, this will have a long-term impact when it comes to signing agreements with other donor agencies.”

Sharma also criticized Nepali Congress for failing to defend the MCC saying, “The NC seems to be acting like a pawn of communist parties in this regard.”

Meanwhile, it should be noted that Britain expelled three Chinese spies posing as journalists in 2020.

Britain’s intelligence agency MI5 said the three “journalists” worked for China’s powerful Ministry of State Security but had been using the cover of working for the country’s press agencies, according to The Guardian.

They were asked to leave, following a report in the Daily Telegraph, the report said.

Using journalistic identities as the cover is long established in espionage, according to The Guardian report adding that it is a method that has been favored by China in pursuit of both political and economic intelligence around the world.

Meanwhile, it should also be noted that the US Cyber Security  Agency and Infrastructure had last year released an advisory on the activities of China’s MSS and its associated agencies, and contractors, according to a report in the CyberWire.

Similarly, an Australia-based Chinese journalist’s home was raided by Australian police as part of an Australian foreign interference investigation in June last year.

The raids were carried out on the same day as a raid on the office of Shaoquett Moselmane, the Australian politician allegedly targeted by foreign interference efforts.

Meanwhile, in the past year, the United States required U.S.-based staff of China’s top state media outlets, including Xinhua, CGTN and the People’s Daily, to register as “foreign agents”, a Reuters report said. (Courtesy Khabarhub)