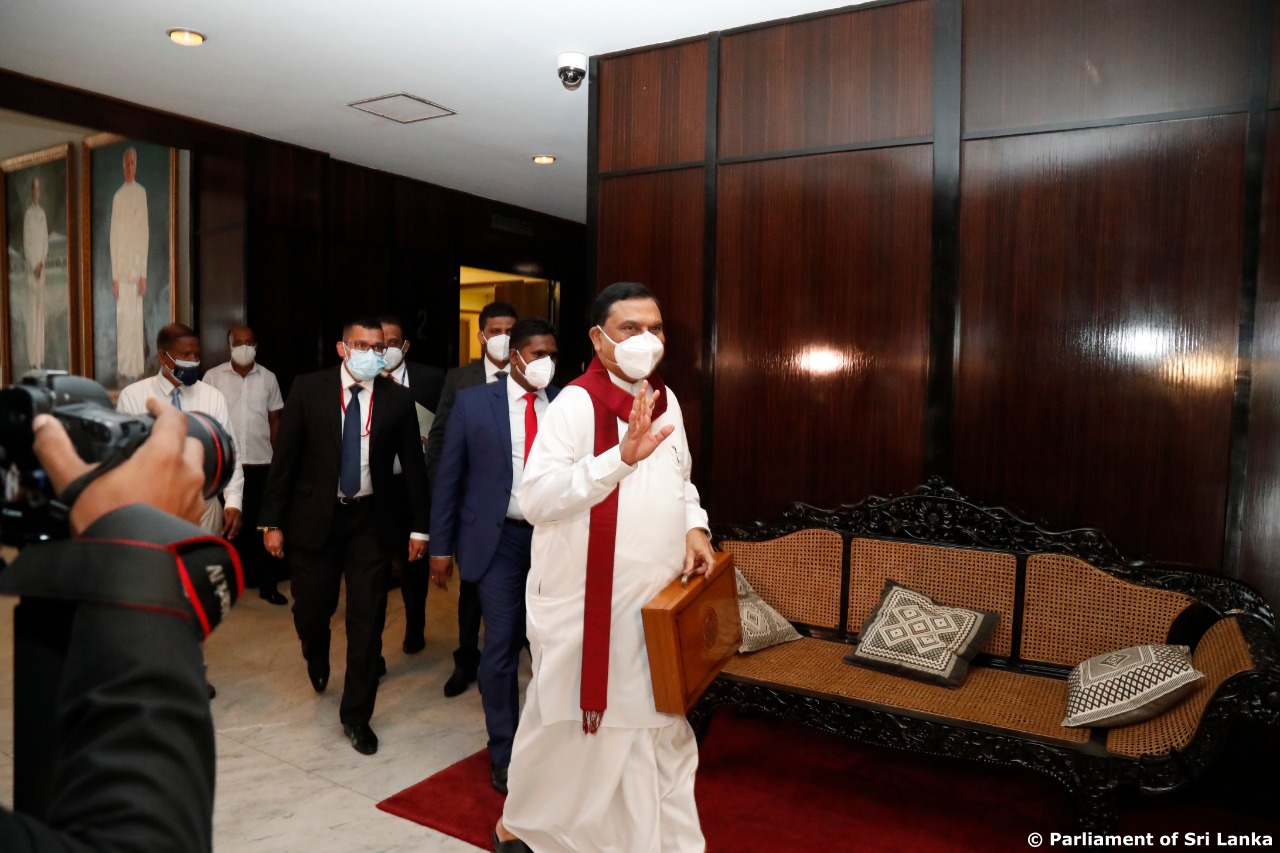 If SJB Leader of the Opposition, Sajith Premadasa’s initial reaction to Budget-2022 is any indication, it is that he has a long way to evolve into a presidential aspirant with mastery over diplomatic nicety.

There is enough in the maiden Budget presented by Finance Minister Basil Rajapaksa for the SJB as a party and Premadasa as the LoP to criticise outright. But in doing so, bad-mouthing another nation is just not on. It is undiplomatic, especially for a politician aspiring to be the nation’s President some day, and an insult to the nation thus used as a bench-mark or whatever.

Yes, the Sri Lankan obsession with the Horn of Africa nation is quite well-known. It is the drawing-room, kitchen-table and coffee-shop references that have possibly inadvertently permeated into the Opposition Leader’s official reaction to a domestic situation. Time used to be when in the previous decade especially, given the crisis that the possible revival of the war in 2006 and thereabouts had brought the Somalia reference into casual conversations even among rural housewives with not much of education and who did not know what that region was about or what that nation stood for, otherwise.

So, it was inevitable that the terminology should have come into the public domain as a political comparison, but only in economic terms. In the past, the reference was also to the impossibility of what some thought was the evolving situation – unending war on the one end and unmanageable economy on the other. Today, the nation at least does not have to worry any more about the LTTE kind of war. That does not however minimise or mitigate the economic woes.

A decade-plus down the line, the latter, evolving over decades, looks larger-than-life, and as if the mess was the creation of a single government, a single family – as pictures of the Budget speech showed. There was Basil presenting the Budget. Sitting across the aisle was President Gotabaya Rajapaksa in his occasional suited-booted fashion, and Prime Minister Mahinda Rajapaksa in his all-white native attire with the family’s branded ‘kurukan satta’ decorating his shoulder.

It was yet another moment for the family album. But it was a critical moment for the nation as a whole. How critical it is, given the already existing economic crises is debatable, and how much more it will hurt the common man and the businesses alike, will be known in the coming days, weeks and months.

For the second time in a row, the Finance Minister of the day fumbled while presenting the Budget. In the previous year, Prime Minister Mahinda Rajapaksa as Finance Minister sought Speaker Mahinda Yapa Abeyawardana’s permission to sit in his seat and complete his Budget speech after it proved too long for him. There were some anxious moments, yes, but soon sorted itself out.

This time round, his younger brother Basil had to rest and relax in an ante room after the Speaker adjourned the House for 15 minutes, in a very unprecedented way. According to reports, his BP had shot up, and needed mild medication. But then it is not wholly unexpected in the current circumstances. That the people’s BP shot up very long ago owing to the economic woes imposed by successive administrations and has been staying there continuously for months and maybe years should be an equal, if not greater cause for concern.

But even more would the BP of many MPs have shot up as they read about the Budget proposal to deny pension to those who are not trusted by their voters twice. That is to say, MPs should have won over the respect and regard of the voters during their first five year term so that they get elected a second time.

This puts loyalty to the voter at a higher plane than loyalty to the party or the leader – or the seat of power that they get to occupy. The list includes the position of ministers, including the high-and-mighty members of the Cabinet.

If the wag asks how does it matter to an MP, especially a minister, Cabinet rank or not, if he is not eligible at the end of five years, as he would have compensated himself better in financial terms, that is beside the point. But there are parliamentarians and parliamentarians that remain honest, get elected at one point in time but are unable to make it a second time. Their plight is worse, but there is no way such persons could be encouraged under the proposed scheme.

At the end of the day, the economy is in bad shape. Full-stop. It can worsen faster than recover earlier. Using the Budget as the new peg, the Opposition SJB and UNP, among others, have started blaming the government and the Rajapaksa leadership. If Prime Minister Mahinda has escaped the onslaught this time, he is lucky for it. Not, President Gota R and Finance Minister Basil R.

The problems with the Budget are not the same as the problems caused by Gota’s unthinking announcement to replace customary use of chemical fertiliser with equally imported organic fertiliser. It would have been one thing if the President had given his own Government and the nation time to make the transition, and by manufacturing the organic fertiliser, nearer home.

Traditionally, whenever organic farming used to be mentioned, the implication was that individual farmers would make his own stuff for his agriculture land in his backyard, using the material available locally – much of it, his farm waste. That’s how things worked – or, did not work – when chemical fertilisers were not known to the world, and was not definitely unavailable in the country.

Today, when Gota announced his idea of ‘organic farming’, none thought that organic fertiliser was to be imported – and was available for import. That should include the Opposition. Unless they knew it was to be from China and still kept quiet when it should have been stopped and the Government told to wait until the bureaucracy and the farming community was ready for the change, that was an equal crime – or, possibly worse.

The controversy kicked up by the Government’s decision to import LNG through the US firm, New Fortress Energy, was/is also unavoidable. Anyway, the matter is before the Supreme Court, where the Attorney-General has already sought a fuller Bench to hear the case. But may be called by every other name in the political lexicon but it’s not cause – at least as yet – for the nation’s economic failure.

Despite all the heavy odds, FM Basil has predicted a hopeful recovery route for the nation’s economy, fixing a six per cent target for GDP growth by fiscal 2024. He has also exhorted the nation to increase productivity, which every finance minister in his place had done in different ways. Difficult times offer difficult choices and Basil could not but have been expected to deliver a no-nonsense message to the nation.

Yet, increasing productivity is not enough. There is a need for increasing tight-belting, for almost all time to come. The nation just does not have the resources to dream big, not as yet. Using deficit-financing as a fiscal tool to divert voter attention to less prioritizable items alone has led to this situation in a way. Cutting on people-oriented subsidies, talking in terms of market economy, the nation just cannot afford.

In the last 15 years, the obsession of the Mahinda Rajapaksa Government followed by the ‘Unity’ dispensation of the Sirisena-Wickremesinghe duo (of which Sajith Premadasa was very much a part) to build express ways after express ways, that too on borrowed money, is a pointer. That the Chinese funder-cum-builder did not create a single job, even if temporarily at the construction sites, for the locals is an add-on woe.

This was unlike the war-time Mahinda dispensation building roads and electrifying internal villages in deep South. It was also a war-time national strategy to send out a message to the LTTE that nothing suffered as they had hoped for. It was also a ‘feel good factor’ when rural Sinhala families were expected to receive ‘body bags’ with the commencement of the decisive ‘Eelam War IV’. But there was development that was low on cost, high on benefits.

The initiative for this has to come from the ruling party, the President. PM Mahinda as the single most popular leader of the nation (as per last proven perception) needs to be in the front to market it to the people at large. But then the Opposition has to be on board – and honestly. At the end of the day, if the people voted out the incumbent Government on issues of economy – or for other reasons – they hope to be at the helm. The leadership (alone) would have changed, not the economy!