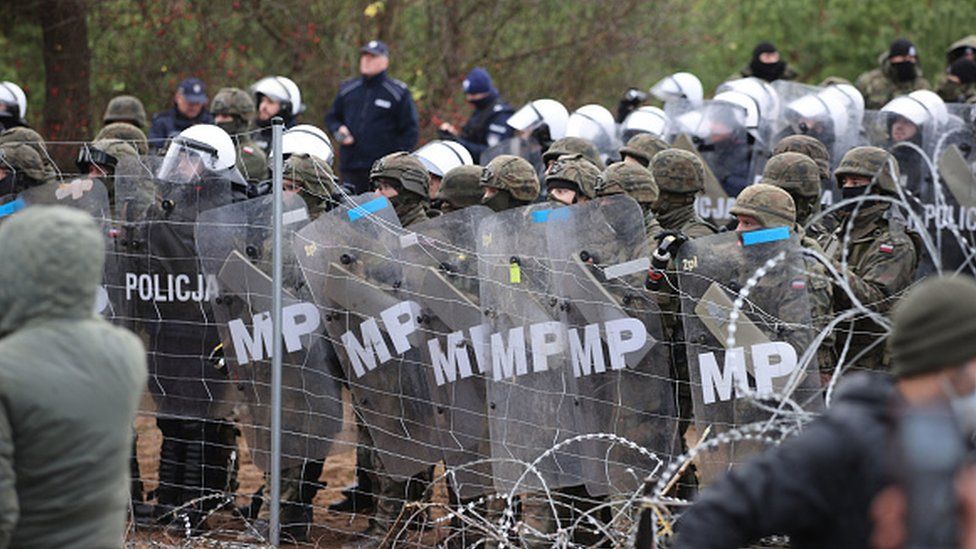 Poland says it has repelled attempts by migrants to enter the country at its eastern border with Belarus, warning that thousands more were on the way.

Video footage showed hundreds of people near a barbed-wire border fence, which some tried to force their way through.

The Polish government called a crisis meeting on Monday and deployed 12,000 troops to the region.

Poland has accused Belarus of pushing the migrants towards the border, describing it as hostile activity.

Poland, Lithuania and Latvia say there’s been a surge in the number of people trying to enter their countries illegally from Belarus in recent months. Many of them have come from the Middle East and Asia.

The European Union has accused Belarus’s authoritarian President Alexander Lukashenko of facilitating the influx in retaliation against sanctions.

Poland, which has been criticised for pushing back migrants and refugees at its border, has responded to the large number of people arriving there by building a razor-wire fence.

The Polish Border Guard also said it was closing its border crossing with Belarus at Kuznica from Tuesday morning.

Conditions for migrants on the border are hostile to the point of being deadly, and fears have been raised for their safety in the region’s sub-zero winter.

As they are summarily expelled from Poland and Belarus refuses to allow them back in, people are finding themselves stranded and freezing in Poland’s forests. Several have died of hypothermia.

The BBC’s Paul Adams spoke to Barwa Nusreddine Ahmed, the brother of one Iraqi migrant who was at the border with his wife and three children. They arrived in Minsk, the capital of Belarus, last month.

With little to eat or drink, the people stuck at the border were suffering, Mr Ahmed said.

He said Monday’s move to the border post was planned on social media by the migrants themselves, but suggested Belarus was pushing them.

“People know they’re being used [by Mr Lukashenko], but they have no future,” Mr Ahmed said.

On Monday, the Nato alliance said it was worried about “escalation” on the border with Poland and was ready to “maintain safety and security in the region”.

Meanwhile in Lithuania, the government there moved troops to its border with Belarus to prepare for a possible influx of migrants and was considering declaring a state of emergency. (Courtesy BBC)