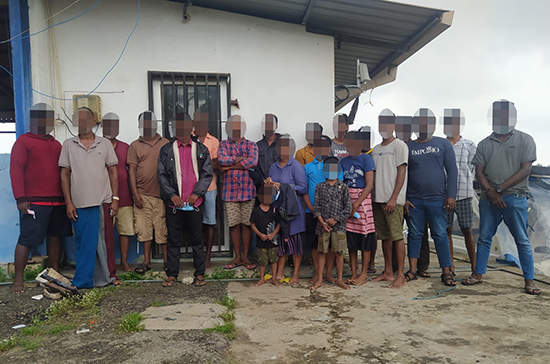 The Navy has arrested 19 people in Chilaw who were trying to migrate by boat.

According to the Navy media unit, the 19 people were arrested following a special operation conducted by the Navy in the beach area of Chilaw.

The Navy also seized a van during the special operation.

The Sri Lanka Navy has been conducting regular operations in the coastal areas around the island to thwart all forms of illegal activities.

On receipt of information the Navy mounted a special operation and searched a spacious van in the estuary of Chilaw this morning and apprehended this group of 19, whom were believed to be on an illegal migration attempt by sea, with the van driver and his assistant.

Among the apprehended group were, 16 males including the van driver and his assistant, 01 female, 03 boys and 01 girl. The suspects are residents of Kilinochchi, Jaffna, Wattala, Batticaloa, Trincomalee, Polonnaruwa, Negombo and Kochchikade areas. (Colombo Gazette)