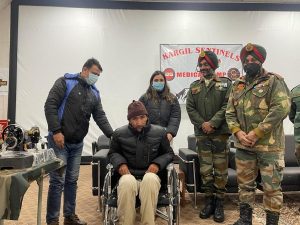 Kargil (Ladakh) [India], October 24 (ANI): The ‘Forever in Operations’ Division of the Indian Army organised a one day-long medical camp under the aegis of ‘Fire and Fury’ Corps in the Kargil District to treat the sick and needy from the remote areas of the district.

Leading specialist doctors drawn from various Army hospitals were pooled in for the camp on Saturday to provide the spot consultation and treatment to the patients visiting the camp, as per a press note released by PRO Srinagar.

“The event was a joint venture with ‘Bhagwan Mahavir Viklang Seva Samity’, a Jaipur based Non-Governmental Organisation (NGO) headed by Padma Bhushan D R Mehta, Chief patron who provided their valuable services in the distribution of mobility aids for the betterment of differently-abled persons,” reads the note.

Over 500 medical equipment like hearing aids, crutches, wheelchairs and self-employment tools like sewing machines were distributed to the differently-abled persons along with medical checkups of sick people followed by distribution of medicines, said an official statement. (ANI)