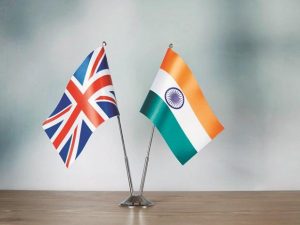 UK Foreign Minister Elizabeth Truss on Saturday said her country and India believed in freedom and democracy and can make the world safer and prosperous.

She was speaking in Mumbai at a reception held on the HMS Defender where industrialists from the UK and India met. Countries like the UK and India believe in freedom and democracy and can make the world safer and prosperous.

“That is the mission of UK and India too,” she said, adding that the two countries were working on a new trade deal in the areas of economy, defence, trade and climate. India is the second largest investor in the UK and I want to see more UK investment in India.

The UK-India economic relationship is already strong with bilateral trade of over 18bn in 2020, supporting nearly half a million jobs in each other’s economies, an official from the media department of the British High Commissioner said. The official said the prime ministers of the two nations have set a target to double the value of UK-India trade by 2030, and have also declared their shared intent to begin negotiations on a comprehensive free trade agreement (FTA) by the end of this year. -(Business Standard)