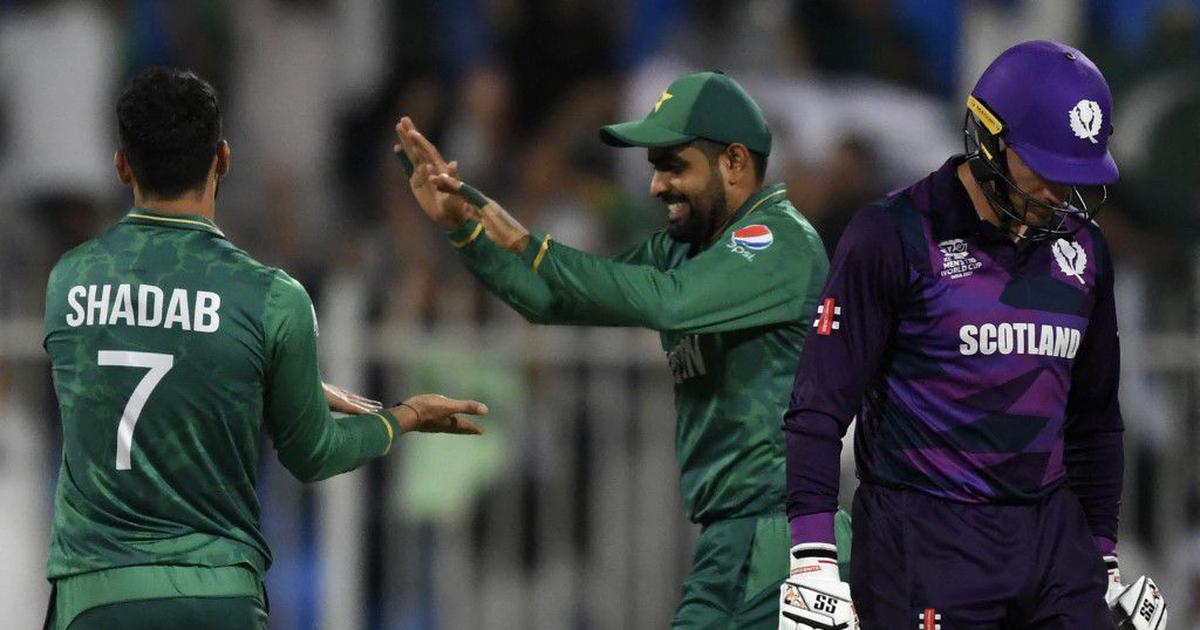 Pakistan maintained their 100% record at the Men’s T20 World Cup with an emphatic 72-run win over Scotland to set up a semi-final against Australia.

They posted 189-4, with Babar Azam making 66 and Shoaib Malik an unbeaten 54 from 18 balls, the joint fastest half-century of this tournament.

Scotland limped to 117-6, with Richie Berrington hitting 54 not out.

England will face New Zealand, who beat Afghanistan earlier on Sunday to knock out India, in the other semi -final.

That game will be at 14:00 GMT on Wednesday in Abu Dhabi, with Pakistan-Australia at the same time on Thursday in Dubai.

Pakistan are the only team in the Super 12s stage to have won all five of their group games, playing confident and entertaining cricket under captain Babar.

Babar, who has four half-centuries in five innings in the tournament, hit five fours and three sixes as he anchored the Pakistan innings – and overtook England’s Jos Buttler as the leading run-scorer in the competition.

Shoaib took over when Babar was dismissed and dismantled Chris Greaves for 26 in the final over. He finished with six sixes and one four in his rapid cameo, equalling India opener KL Rahul’s fastest 50 of the tournament.

It is also the joint third-fastest half-century in the seven editions of the T20 World Cup.

The 39-year-old has now scored 99 runs from 53 balls in the tournament, and in him and Asif Ali, who has scored 57 runs at a strike-rate of 247.83, Pakistan have two serious finishers that will worry the remaining sides.

With the ball Pakistan, who have now won 16 consecutive T20s in the United Arab Emirates, continue to have all bases covered with fast bowlers Hassan Ali and Haris Rauf and the left-arm pace variation of Shaheen Afridi.

That, combined with the off-spin of Imad Wasim and leg-spin of Shadab Khan, gives Babar options and they have all been disciplined throughout the Super 12s and chipped in with wickets in different games.

Babar has opted to bat first in the last two games to test the batters and let his bowlers practice with a wet ball due to the evening dew, and that may help. But their bowlers have not been put under any real pressure at any stage so it is hard to know how they will cope if the semi-final or final got tight.

For Scotland, this defeat rounds off a disappointing Super 12s campaign that has seen them lose all five games.

They were brilliant in the qualifying tournament to earn three wins against Bangladesh, Papua New Guinea and Oman, but have been out-classed against better opposition, including heavy defeats against Afghanistan, India and Pakistan.

The form of captain and opener Kyle Coetzer will be of major concern, with the 37-year-old scoring just 84 in seven innings and 37 in four innings in the Super 12s. Berrington, though, has impressed with 177 runs and spinner Mark Watt was economical throughout.

Their focus will now turn to qualifying for the 2022 Men’s T20 World Cup, which will be held in Australia in October and November next year. (Courtesy BBC)