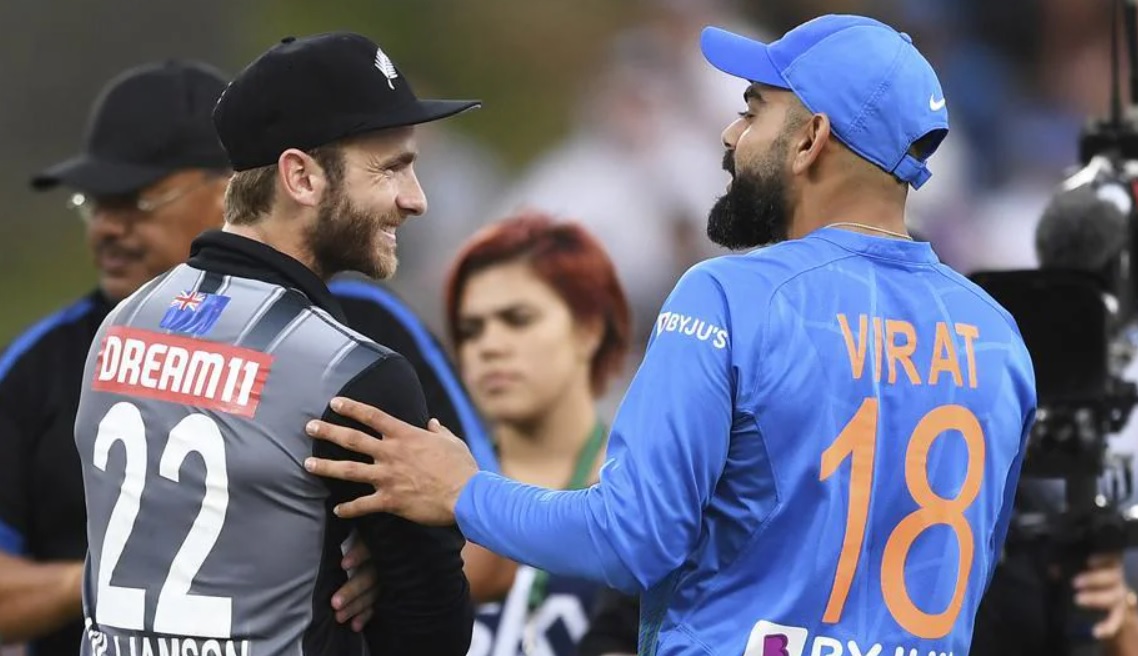 India’s hopes at the Men’s T20 World Cup are hanging by a thread after New Zealand inflicted a second successive miserable defeat on the pre-tournament favourites.

After a 10-wicket thrashing against rivals Pakistan in their opening game, Virat Kohli’s side were woefully abject again – New Zealand chasing 111 with 33 balls to spare in Dubai.

Put into bat, India lacked intent and crawled to 110-7, only hitting eight fours and two sixes to all but silence an Indian-dominated crowd.

Jasprit Bumrah removed Martin Guptill for 20 but Daryl Mitchell, who made 49 off 35 balls, shared 72 with Kane Williamson.

Williamson finished 33 not out as New Zealand picked up their first win and severely dented the hopes of star-studded India.

Pakistan lead Group 2 with three wins from three games, while Afghanistan have four points and New Zealand and Namibia both have two points. India and Scotland are pointless.

India have an embarrassment of riches and power when it comes to batting and that is why they were labelled as favourites pre-tournament by England captain Eoin Morgan.

Yet they posted a below-par score against Pakistan and this was another shockingly subdued effort, despite a slow and tricky pitch.

In stark contrast to England’s blistering win over Australia on Saturday, India were happy to block at the start before three really tame dismissals left them 40-3 halfway through the eighth over.

Ishan Kishan was caught on the square-leg boundary, KL Rahul was caught pulling and Rohit Sharma, who was demoted from opener for just the third time in 77 Twenty20 internationals, flat-batted to long-on for 14.

It left Kohli and Rishabh Pant to rebuild, but they were cautious too and happy to just rotate the strike. Kohli then holed out to long-on off Sodhi for just nine.

Pant and Hardik Pandya curbed their naturally aggressive instinct and India’s lack of intent and strategy perplexed as 71 balls passed without a boundary through the middle overs.

It was only Jadeja, who managed to hit two fours and one six, who showed any positivity and desire to haul India to a competitive total. (Courtesy BBC)